This article is over 9 years, 3 months old
Documents disclosed to the recent Hillsborough disaster panel show the unanimity of the establishment in blocking new inquiries into the tragedy. But public pressure was such that they couldn’t get away with it.
By Sadie Robinson
Downloading PDF. Please wait...
Tuesday 25 September 2012

Documents disclosed to the recent Hillsborough disaster panel show the unanimity of the establishment in blocking new inquiries into the tragedy. But public pressure was such that they couldn’t get away with it.

The 1989 disaster killed 96 Liverpool football fans. Police failed to divert fans to empty pens and refused to help them escape the crush. Then the cops covered up their role in the deaths.

The disclosed documents reveal successive governments’ reluctance to get to the truth. Home secretary Jack Straw planned a new investigation into the disaster just after the Labour government was elected in 1997.

A memo from deputy chief of staff Liz Lloyd to prime minister Tony Blair said of the plans, “Undoubtedly it is a response to public pressure.”

The memo continues, “JS [Straw] does not believe that there is sufficient new evidence for a) a new inquiry, b) re-opening the inquest or c) prosecution of individuals. However, he believes that this is not publicly acceptable unless it comes from an independent source.”

This was confirmed in a letter from Straw to the attorney general, John Morris. He said that “continuing public concern will not be allayed with a reassurance from the home office that there is no new evidence”.

He then set up the Stuart-Smith Scrutiny to look at new evidence. Straw met Lord Justice Stuart-Smith at the end of June 1997. He said that his officials had already concluded that “there was not sufficient evidence to justify a new inquiry”.

Stuart-Smith published his report in February 1998. He ruled that there was no justification for a fresh inquiry into the disaster or for new inquests into the deaths.

He described the widespread altering of police statements as “at worst an error of judgement” and rejected allegations of “irregularity and malpractice”.

Straw wrote to the attorney general once Stuart-Smith’s report was complete. “We now need to agree our response to his conclusions,” he wrote. “It is important that, as far as possible, publication of this report should draw a line under speculation about further investigations or proceedings.”

He went on, “I should say on publication of the report that you and the director have considered its conclusions, and on the basis of the material which it contains, the director consider that there is no basis which would justify fresh criminal investigations, and that you consider that any application to the high court for a new inquest would not have any realistic prospect of succeeding.”

Straw’s main concern wasn’t about whether the survivors and families of the dead had received the truth or justice. It was to put off any further campaigning and to try and close the case.

If the Tories and Labour had their way, the independent panel report would not have been published. It is a testament to the sustained campaigning of families and survivors that it was.

There was anger on the terraces across the country—as Socialist Worker supporters found when campaigning outside matches this weekend.

Hundreds of working class people queued up to sign petitions for justice, from those who still remember how they felt on the day of the disaster to those too young to have been born. Had the 1989 season turned out differently, it could have happened to any of them.

There was a quiet but resolute anger that those who had lied about the deaths for 23 years were still free—some of them still with knighthoods.

Some 135 copies of Socialist Worker were sold at West Ham, 91 at Celtic and more than 50 at Swansea where Liverpool’s local rivals Everton were playing. There were also stalls at other matches including Birmingham City and Tottenham Hotspur.

Companies rush forward to cash in

Firms wasted no time in trying to cash in on the disaster. On 19 April 1989, just four days after the disaster, TK Monks wrote to prime minister Margaret Thatcher.

“I was most distressed to hear of the Hillsborough football tragedy last Saturday,” he said. “My company is very much involved in the installation of public address systems into all sorts of areas, including sports grounds.”

He wrote, “Had intracard been in operation… perhaps there would not have been so much support travelling without tickets.”

He added, “The Liverpool supporters showed scant regard for their fellow supporters or the officials present.” Millman admitted, “Intracard is not completely altruistic.” Quite.

The disclosed documents include some letters from survivors. One Liverpool fan wrote to sports minister Colin Moynihan on 18 April 1989. He said many fans arriving late were “ticket holders who had been delayed by police”.

He describes police marching “in military fashion” to line up and separate opposing fans from each other “while the dead and dying were ferried across the pitch on makeshift stretchers by Liverpool supporters”.

He concludes, “Most of all I blame the police who decided at the highest level to put public restraint before public safety and carried out a policy which has at its root the belief that football supporters are dangerous animals.” 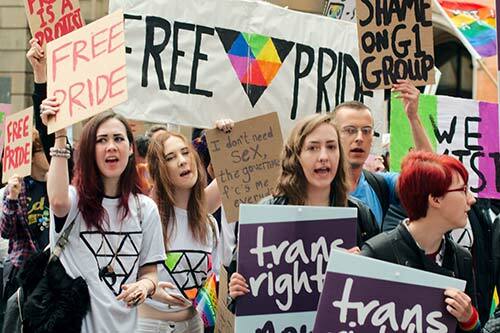