IS MARXISM relevant only for workers in the industrial nations of Europe and the US? This is a central question for many who are looking to explain a global system which causes devastation, poverty and war.

This article is based upon “Is Marxism Eurocentric?”, a talk given by Abbie Bakan, a socialist from Canada, at the recent Marxism 2000 event.

THE CHARGE of “Eurocentrism” is that Marxism is only relevant to the residents of Europe, or more specifically to people of Anglo-Saxon European descent. But Marxism is not about the analysis of a specific geographical part of the world. It is a theory of class divisions and specifically of capitalism. Marxism charts the emergence of a form of production based upon the ownership and control of the means of production by a small minority of society.

This creates an elite class of super-rich exploiters while the majority are forced to sell their labour power in order to survive. Marx did write predominantly about Europe. But that was because it was here that capitalism first sank its bloody roots. The capitalist system did not stop at the boundaries of Europe. It advanced, often at the point of a bayonet, to conquer the globe.

Marx correctly predicted as early as 1848 that capitalism would become a world system. He said that it would mean “the entanglement of all peoples in the net of the world market, and with this develops the internationalist characteristic of the capitalist regime”. That brilliant insight is now common sense.

Today no part of the world is free from capitalism’s chains. Everyone is aware of the power of the multinationals and of global financial institutions such as the International Monetary Fund, the World Bank and the World Trade Organisation.

Because Marxism is a theory of capitalism, which is a world system, it is a guide to analysis and activity everywhere. Marxism does not only deal with the economic dynamic of capitalism. It also explains the way capitalism affects every part of our lives, and how it oppresses and divides people.

The Marxist tradition has a rich legacy of fighting racism, and also of understanding the specific relationship between oppression and capitalist exploitation. If you look at the writings of Marx and Engels it is impossible to avoid their emphasis on the importance of working class unity and fighting oppression. They argued that a key feature of oppression is that it pits one section of workers against another. The only force that benefits materially is the ruling class.

Marx analysed the way Irish immigration to England was used by the ruling class both as a source of cheap labour and as a way of dividing the working class: “All English industrial and commercial centres now possess a working class split into two hostile camps: English proletarians and Irish proletarians. The English worker hates the Irish worker because he sees in him a competitor who lowers his standard of life. This antagonism is artificially sustained and intensified by the press, the pulpit, the comic papers, in short by all the means at the disposal of the ruling classes. This antagonism is the secret of the impotence of the English working class.”

Such divisions have been an incredibly effective tool for the continued rule of the ruling class.

RACISM AND other forms of oppression work as a ruling class strategy of divide and conquer. This theme runs through many of the writings of Marx and Engels. Marx summarised his approach in Capital when he wrote, “Labour cannot emancipate itself in the white skin where the black skin is branded.” The conquest of oppression involves an assault on the system which divides us-capitalism. Marx looked to the working class as the central element in this battle.

His emphasis on the centrality of the working class was not based on any abstract moral hierarchy. Rather, it was because Marx identified a class with the power not only to resist exploitation and oppression, but also to transform the system. In the Communist Manifesto Marx and Engels give one of the most clear and concise descriptions of the revolutionary potential of the working class. Class struggle is not unique to capitalism. The opening lines of the Manifesto state that “the history of all hitherto existing society is the history of class struggle”.

But capitalism has a tendency to pull society very sharply into two opposing classes-the bourgeoisie, the propertied class which concentrates all the productive forces in its hands, and the proletariat, the propertyless class. Workers sell their ability to work and produce vast amounts of wealth. But they go home with a wage which represents only a small proportion of what they’ve produced.

At the same time Marx and Engels identified a very key contradiction in the working class. Just as workers need to work for capital, capital needs workers to exploit.

That gives workers tremendous power. Workers work collectively and have the ability to collectively transform society. That is why Marx and Engels referred to the working class as the gravediggers of capitalism.

Russia is actually partly in Europe and partly in Asia. Russia in 1917 had very similar dynamics to the Third World today. Tsarist Russia was a backward country that was forced to compete with the advanced states of Western Europe.

There were large concentrations of industrial centres within a largely agricultural economy. Only 20 percent of the population were part of the industrial working class at the time of the revolution.

In Russia the debate was settled in practice. The Bolshevik Party saw that the Russian working class could take power in advance of the Western countries. The revolution began with workers and spread very quickly to peasants, who settled centuries of debate about the land question by seizing control of their land.

The Bolsheviks looked to workers in Russia as part of working class revolution internationally. The struggle for socialism could be launched in conditions of underdevelopment, but its full development meant spreading it elsewhere. If workers in the advanced countries also took control of the productive process then in one fell swoop they could break the back of imperialism and colonial oppression.

Today workers and students are once again starting to look to ways to challenge a system driven by profit and corporate greed. Marxism provides a rich tradition grounded in theory and practice, the broadest possible internationalism and working class solidarity. 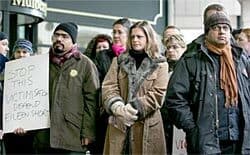