This article is over 9 years, 8 months old
A leading Roma activist based in Britain is facing extradition to Bulgaria—where his life will be in danger from racists.
By Sadie Robinson
Downloading PDF. Please wait...
Tuesday 15 May 2012

A leading Roma activist based in Britain is facing extradition to Bulgaria—where his life will be in danger from racists.

Toma Nikolaev was imprisoned in Bulgaria after speaking out for Roma rights. “There’s a lot of discrimination and racism against Roma people in Bulgaria,” he told Socialist Worker.

He first came to Britain in 2001 and applied for political asylum here. But now the Bulgarian government has applied for his extradition.

Toma was arrested under a European warrant shortly after he joined a protest at the Bulgarian embassy in London on 8 April. An extradition hearing is set to take place on Tuesday of next week.

If Toma is forced to leave Britain he faces prison. He was sentenced to a year in jail for public order offences after a Bulgarian police officer accused him of “acting in a disorderly manner”.

Toma had previously taken the police officer to court over racism. The officer was found guilty of discrimination and dismissed from the police service—yet Toma was the one who ended up behind bars.

Toma says he can’t face the prospect of being forced to go back to Bulgaria. “The racists are looking for me and my family,” he said.

“I don’t want to think about what will happen if I go back. I’m very scared that this will be the last time and that these people will kill me.”

Lecturers could strike on budget day in March

Corus is killing steel, and Scunthorpe 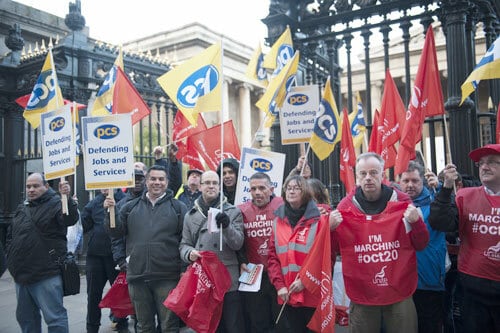