FARMERS ARE screaming that the foot and mouth outbreak has caused a crisis in agriculture. This view is backed up by the Daily Mail and Daily Telegraph, which condemn urban dwellers for ignoring the farming community’s plight. They gloss over the fact that there are two types of farmers-the rich landowners who run agribusiness, and the poor farm labourers.

The rural rich have made fat profits out of the farming industry. They argue that farming has been in recession since 1995 and plead poverty. But this came after a boom. The average income from farming doubled in just five years from 1990 to 1995. It hit its highest level for well over 30 years. The agribusinesses also reaped 3.1 billion in government subsidy last year. But they drove through cost cutting measures at the same time, like any other bosses.

They cut 11 percent of farm workers’ jobs last year before foot and mouth took hold. The rich farmers are now facing a crisis of their own making. It is the logic of market forces running agriculture where profits come first while food safety and animal welfare come last.

These are the same big farmers who put animal parts in feed for other animals to eat, with BSE mad cow disease as a result. Their profiteering means an unknown number of people will die from CJD, the human form of BSE. These big farmers run the majority of the countryside.

The top cereal farmers were making over 100,000 a year in the mid-1990s. They are still raking in over 50,000 a year in profit now. The businessmen behind these giant farms try and exploit the plight of small farmers to demand government subsidies for “farming”. Small farmers have suffered. They work long hours to try to keep afloat in the same way a corner shop owner does in the face of competition from giant supermarkets.

Their income has dropped massively, and many have been forced to give up their farms. They are also squeezed by the five giant supermarkets that control four fifths of food sales in Britain.

They can cripple small farmers by forcing them to take a cut-throat rate for their produce while hiking up prices on the supermarket shelves. Now the big farmers are pretending they have a common cause with small farmers to grab more subsidies.

This would boost their own profits while continuing to drive the small farmers out of business. Subsidy money doesn’t help hard-hit small farmers. Around 80 percent of the subsidies go to just 20 percent of farmers-the biggest. New Labour has come under intense pressure from the big farmers. It has already given into pressure from the Countryside Alliance farming lobby over banning hunting.

Dozens of New Labour lords backed a motion that kept hunting when the bill returned to committee stage on Monday of this week. The government’s solution to the foot and mouth outbreak again helps the big farmers. It says, “The key to rebuilding farm incomes will be a restructuring and faster productivity growth. Restructuring does, of course, mean a faster rundown in the number of farms, and the numbers of people working in farming.”

So New Labour will help the big farmers, like any City businessmen, to sack workers, bankrupt the small farmers, and concentrate even more land and wealth in the hands of the biggest farmers and a few giant agribusinesses. 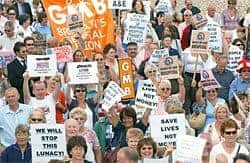 10,000 march against hospital cuts in Worthing