Doncaster bin strike called off, but over a third of workers voted to keep fighting

This article is over 9 years, 3 months old
Bin workers in Doncaster, South Yorkshire, voted to call off their strike in a tense meeting last Friday. Some 50 of the 120 workers voted to keep fighting.
By Dave Sewell
Downloading PDF. Please wait...
Tuesday 02 October 2012

Bin workers in Doncaster, South Yorkshire, voted to call off their strike in a tense meeting last Friday. Some 50 of the 120 workers voted to keep fighting.

The workers are members of the Unite union employed by Sita. A previous two-day walkout for a better pay deal saw mass pickets turn away scab wagons. Then they voted to escalate to all-out action.

“We’ve stood up for ourselves like we never did before,” bin worker Darren Corden told Socialist Worker. “For years it’s been all take and no give.

“They’ve taken all our perks and made the rounds so big you can’t do them without help. All they ever offer is a few percent. That doesn’t even bring us in line with other Sita workers in the country.”

On Thursday bosses came back with another offer—working out at an extra 23p an hour backdated to April, with further rises in line with RPI inflation over the next three years.

This falls well short of the £1 an hour the workers demanded, and fails to bring their wages in line with other drivers in the region. Worse, it also locks them into a three year no-strike agreement—tying workers’ hands behind their backs just when they had bosses on the run.

“The offer is an insult,” another worker told Socialist Worker. “They hadn’t expected anything like the turnout there’s been on the picket lines. Now they’re bricking it.” But the Unite union recommended the deal.

There was heated debate outside the depot in the run-up to a mass meeting. Some workers were nervous about all-out action, while others argued to push while bosses were on the run.

After a union official spoke, workers against the deal argued for a vote there and then. More hands went up against the deal than for it. But officials insisted on a secret ballot which went 70 to 50 in favour of the deal. 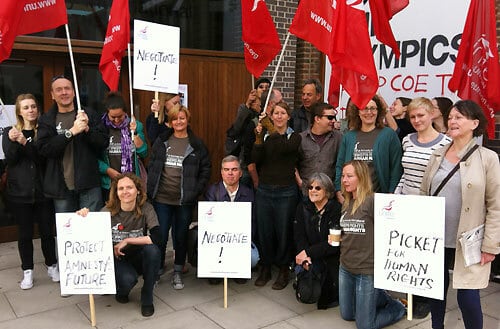