Decoupling the disputes could undermine damage the solidarity and unity that has developed between workers
By Sophie Squire
Downloading PDF. Please wait...
Tuesday 25 January 2022

Equal pay – one of the ‘four fights’ (Picture: Guy Smallman)

University workers will head to picket lines in the next few months, with strike dates set to be announced in the coming weeks.

The members of the UCU union took three days of strikes last year over two linked disputes. These are pension cuts, and the “four fights”—pay, workload, contracts and equalities.

After the strikes many said the best way to win was to escalate. That mood was reflected in ballot results last week which saw twelve new branches joining the fight.

Yet UCU’s leadership is out of step with this. At a recent meeting of its Higher Education Committee the leadership indicated it wants to separate the two disputes.

Members of the union had already fought against this in November, rightfully arguing it would weaken the fight.

Members of the UCU Left group, which Socialist Worker supports, put forward a motion at a meeting of branch delegates the day before. It called for simultaneous action in both disputes as soon as possible.

The motion was broadly backed by the delegates but ignored by the union’s leadership.

Instead different forms of action taken at different times for the two disputes were proposed. It was also unclear when strikes over the four fights would begin.

Decoupling the disputes could undermine damage the solidarity and unity that has developed between workers, because the disputes have been fought together. The best way to win against the university bosses is for university workers to strike together and for as long as it takes to win. Strike dates should be called immediately.

Rank and file members must force those at the top of the union to listen to how workers want to fight this dispute—and be ready to challenge them. 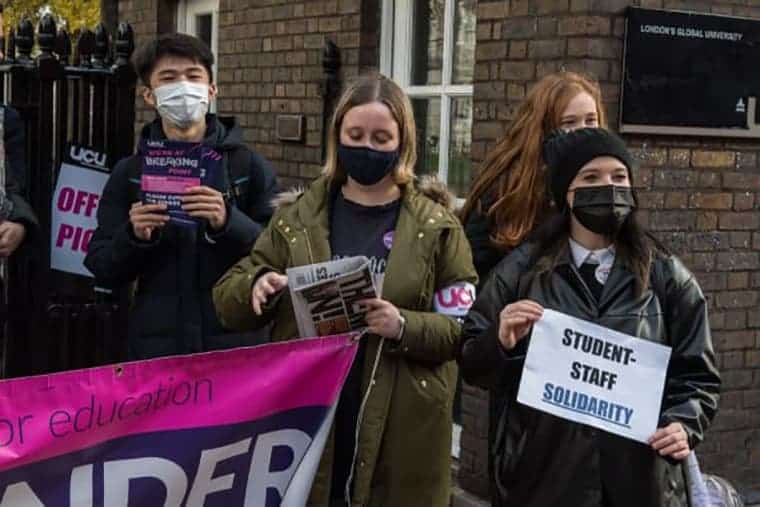