This article is over 9 years, 8 months old
Teachers at a north London school took part in the first strike in Britain against a forced academy this week. The NUT union members at Downhills Primary School in Haringey walked out on Tuesday.
By Sadie Robinson
Downloading PDF. Please wait...
Tuesday 22 May 2012

Teachers at a north London school took part in the first strike in Britain against a forced academy this week. The NUT union members at Downhills Primary School in Haringey walked out on Tuesday.

Downhills is just one of the schools that Tory education secretary Michael Gove wants to forcibly privatise. But teachers, parents and other trade unionists are fighting back.

Bee Irfan teaches early years at Downhills. She told Socialist Worker, “I’m worried about what will happen to the kids if the school becomes an academy. We do a lot of work through play, but an academy sponsor could change that.”

Julie Davies is branch secretary of Haringey NUT. “Teachers don’t want to work for a private firm,” she told Socialist Worker. “It will put terms and conditions at risk. We will plan for more strikes if Gove doesn’t back down.”

Phil Brett, an NUT rep at the school, said the overwhelming solidarity was “heartwarming”.

He said, “We feel bullied by Gove but the level of support we have shows this is not just about Downhills. It’s about the national privatisation of education.”

Parent Susan Moyes said, “One of the great things about our school is that it’s close-knit. I think the government has picked on the wrong school.

“I’m a working parent so I had to take the day off today. But I support the strike because this is a matter of principle.”

Michael Gove removed the school’s governing body in March and imposed an Interim Executive Board (IEB). Many of those on the board are linked to the Harris Federation, which wants to take over the school.

Dan Rosser, a year six teacher, said that things had got worse since the IEB was imposed. “You’re always on edge,” he said. “You’ll be teaching a class and people from the IEB will just wander in.”

Schools inspectorate Ofsted said that there was a “clear trend of improvement” at Downhills in September last year. Yet earlier this year it declared that the school was failing.

Dan said, “The last inspection took place after we’d campaigned against the academy. Less than six months before Ofsted said we were improving. Nothing has changed.”

The campaign at Downhills can have an impact across Britain. Stefan Simms, a teacher from Ealing in west London, said that teachers there were inspired by the Haringey campaign.

Alasdair Smith, national secretary of the Anti Academies Alliance, added that forced academies “expose the myth that academies are popular”.

Unison union members at Downhills are balloting for strikes. A united strike would pile the pressure on Gove and has the potential to force him back.

Teachers in 15 primary schools across Birmingham are balloting for strikes against plans to force their schools to become academies.

The results were due as Socialist Worker went to press. Workers warn that more than 30 schools are threatened with privatisation across the city.

NUT members at The Kimberley School in Nottinghamshire have voted by 79 percent to strike against turning the school into an academy.

They are set to walk out on Tuesday of next week and also plan strikes on 13 and 14 June. 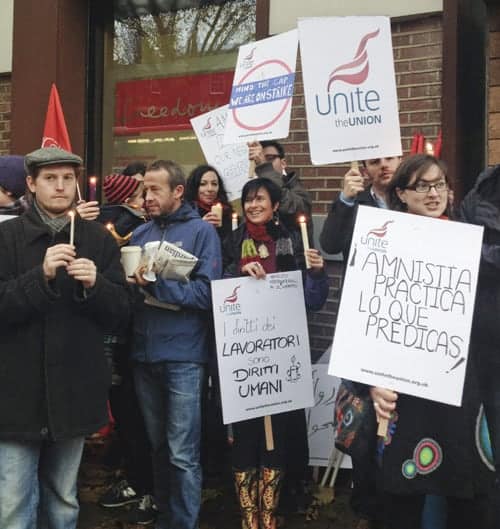 Occupiers' adventure to save threatened playground