They show that the Tories want to dramatically scale back DSA services.

Recent leaks proved that DSA management had been secretly planning for months to close the Cardiff office, and plans to close the Newcastle one.

Penning said that the agency could get rid of permanent test centres, and make “use of community centres, supermarkets etc as a base for examiners to work from on set dates”.

He also said that he was looking at whether driving tests “could be provided more efficiently at a lower cost; and whether they could be undertaken by other organisations inside or outside the public sector”.

Another document suggests that private firms could use “delegated examiners”—private testers whose pass rates are 20 percent higher than DSA examiners.

The union is moving towards this. 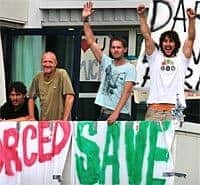 Vestas day of action has wind in its sails

Crisis, what crisis? The rich live it up