Dundee hospital porters took on their bosses over low pay with a 13-week all-out strike – and they have won.

They’ve shown that workers can fight and win.

He told Socialist Worker, “I was a band 1 porter when we walked out and during the strike 14 porters on temporary contracts lost their jobs. But now I am going back to work with better pay on band 2, and the 14 guys now have permanent jobs.”

Porters debated a new proposal from NHS Tayside bosses at a mass meeting today. They voted by 86 to 11 on recommendation from their union to end the strike.

Ronnie said, “To feel that we had the bottle to stand up against the bosses was brilliant.”

The deal means the porters get a wage rise of around 7 percent – an extra £16 a week to low paid NHS workers. That will rise to around £40 a week once they reach the top of their new pay band, which will be sooner than bosses wanted because workers forced a better deal.

Porters have also been offered a lump sum payment. This meats their demand for compensation for years of being on a lower grade than other NHS-employed porters in Scotland.

Those who were employed on fixed term temporary contracts have now been given permanent posts. All their terms and conditions have been backdated to the day they started. Ronnie said, “We’ve proved that is worth standing up against austerity.” 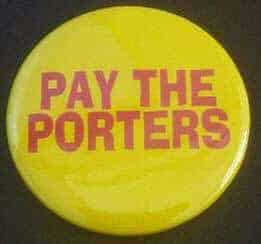 He believes that the porters’ decision to start putting political pressure on the Scottish National Party (SNP) to do something made a difference.

Health is devolved to the Scottish government and SNP health minister Shona Robison is also the local Dundee MSP.

Porters began picketing her constituency office last week after they felt she was blocking a deal.

Ronnie said, “We got a big lesson in what the SNP is all about. Anti-austerity? I don’t think so. Shona Robison distanced herself from our dispute, but I think our protests built real pressure.”

He had never been on strike before and didn’t regard himself as a “political person”, but said the experience had been “a real eye-opener”.

He said, “I’ve always been a Labour man, but I could never ever vote for them again. Neither Labour or the SNP ever visited our picket lines in support – only the socialists did.”

The long dispute has also changed those involved.

“There were peaks and troughs throughout the journey,” he explained. “At one stage I thought we might drop off, but we actually got stronger because we stuck together.” 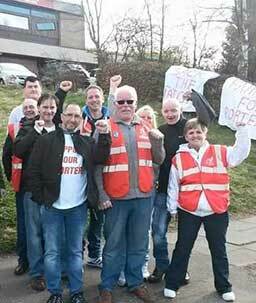 A porters picket line during the beginning of their strike

Ronnie said this solidarity was important, and was great to know their struggle helped inspired others. “That we’ve given confidence to others is fantastic,” he said.

He said, “We are a closer unit now. It’s instilled a sense that when we go back we don’t have to take any crap.”The porters feel more confident and union organisation is now much stronger. During the dispute reps demanded to be present at every set of negotiations alongside union officials.

It is brilliant that the porters have won what they deserve, but the struggle against austerity continues. This is a victory that should be spread around. The next time someone argues strikes don’t work – tell them about the Dundee porters.

No wonder the Tories want to stop us striking.

Redundancies off the table at Dundee University?