Dying from the filth in the air

Dying from the filth in the air

AIR POLLUTION kills twice as many people in Europe as traffic accidents. This was the conclusion of research carried out by the World Health Organisation (WHO). Six percent of all deaths in France, Austria and Sweden, 40,000 a year, are caused by pollution.

Traffic causes around 290,000 cases of bronchitis in children and 500,000 asthma attacks. The environmental group Friends of the Earth says that around 19,000 people in Britain die because of pollution.

Despite this Michael Portillo, the Tory shadow chancellor, has launched a campaign against New Labour’s energy tax. This tax is designed to make chemical firms reduce emissions. Portillo has a 10,000 consultancy with the Kerr McGee Corporation, a US oil and chemical company. 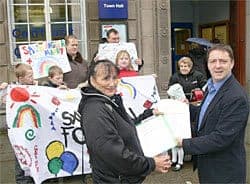