Gould’s spin on the wheel

UNLIKE THE Dome, the London Eye, the vast wheel which offers panoramic views of the capital, has been genuinely popular. Yet many people who want to ride on the Eye have been infuriated by delays, queues and lost tickets. People who have travelled down for a holiday in London have had their visits ruined by not getting on the Eye when they thought they had booked tickets. But for some clients the way is much smoother.

Eye owner British Airways has set up a special phone line for corporate customers to book “exclusive capsules”. Some have gone even better. New Labour spindoctor Phillip Gould has booked the whole Eye for his fiftieth birthday party celebrations this month. By our reckoning, even at the special corporate rate the spindoctor’s whirl comes in at a snip-just 11,200 to hire all 32 capsules.

THE WORLD Bank recently appeared to make a gesture towards the victims of Mozambique’s floods. Under pressure of public opinion, the bank said it would “forgive 100 percent of debt service payments” this year. The pledge appears to offer millions of pounds that could help rebuild the devastated country. It seems the gesture is a con. The money Mozambique won’t pay this year will simply be added on to payments due in following years. World Bank spokesman Jeff Katz explains, “In the first year we will forgive 100 percent of debt service payments.” But then he adds, “Which means in later years we will forgive less than we had previously planned.”

“WOULD you buy a used car from this man?” is an old clich. It certainly applies to the spiv who has put up 100,000 to become one of the new faces behind the One Stop Car Shop used car dealers-disgraced liar and Tory peer Jeffrey Archer.

“MONGOLIA IS a beacon of pluralistic free marketing.” That was the astonishing claim of Thatcherite Tory MP James Gray in parliament last week. Gray has a fragile grasp on reality. An official United Nations report-issued on the same day Gray made his speech-warned that Mongolia is on the brink of a huge human disaster. The old Communist regime was a disaster for most Mongolians. But the market has turned disaster into catastrophe. The livestock on which most of the population depend are dying from harsh weather and a lack of fodder. Half a million people are now facing starvation. “Those most affected by poverty and food insecurity include the unemployed, the elderly, female-headed households, pensioners and small herders,” reports the United Nations. A real beacon for the free market, Mr Gray.

Some sausage rolls, chips and turkey drumsticks were left over and were about to be thrown in the bin.So Agnes decided to take them home. “It was just leftover food. Everyone does it,” she explains. But her private contractor employer, hired by Wandsworth’s Tory council, sacked her. Agnes’s GMB union is fighting the case. “This is an appalling injustice that would have raised eyebrows in the 19th century, never mind the 21st,” says the GMB.

The 1 million rise, backdated to last May, makes New Labour Cardiff council leader Russell Goodway Britain’s highest paid councillor, on 58,500 for a three day week. Eight Labour councillors refused to back the rise, pointing out that at the same time the council was pushing through a 2 million cuts package.

A builder chosen by the government to be the public face of its New Deal is alleged to be a business failure who owes 6 million to creditors. Ray Porter was a star of the TV commercial about the scheme.

But the Tonight with Trevor McDonald programme alleges that even at the time there were serious questions over Porter’s business. Young workers given jobs on the New Deal scheme at his company now face the dole. His firm, Porter Builders, is the subject of a string of court judgements from dissatisfied creditors. Before it went bust Porter Builders also donated money to New Labour.

TV PRESENTER Sheena McDonald has slammed police after yet another person was killed by a police car. McDonald was herself badly injured last year when she was run down by a police van. She spoke out last week as the funeral of Helen Barbour took place in Scotland. Helen, a 55 year old doctor’s receptionist, was killed when a police car smashed into her car. McDonald warned that more would die unless something was done to tackle the police’s “culture of speed”. “Driving fast is part of the police culture. Speed apparently matters very much to them, and having the licence to drive over the speed limit and on the wrong side of the road. These are young boys driving what are in effect lethal weapons.”

“MAKING people redundant is not a nice thing to do to a human being, but nor is removing haemorrhoids-and sometimes that needs to be done.”

“I DON’T see myself as the fresh new face of Rover. I’m just part of a team that will deliver BMW’s ambitious worldwide plans for the Rover marque.”

“A HALF baked idea. This is not acceptable. It is the beginning of removing education from local government.”

“IF YOU have just come from Afghanistan, and the last time you saw wives and children taken out it was to be shot, then it’s terrifying for people to be separated in this way.”

“MY MUM always told me to steer clear of redheads”

“WE’VE developed a new language that doesn’t include the words ‘Frank’ or ‘Dobson’.” 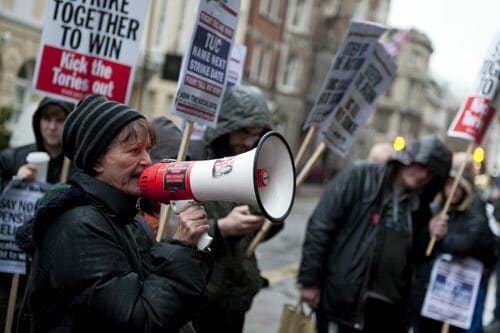 Pension lifeboat is under threat

Organising for Fighting Unions in Preston