Ed Miliband has little to say to workers

This article is over 10 years, 1 months old
Dozens of Labour Party constituencies and thousands of Labour activists declared their support for the 30 November strike.
Downloading PDF. Please wait...
Tuesday 06 December 2011

Dozens of Labour Party constituencies and thousands of Labour activists declared their support for the 30 November strike.

But the party’s leadership had little to say about the largest wave of working class action in generations.

Labour leader Ed Miliband decided against condemning the strike, as he had done when workers walked out on 30 June. But he pointedly refused to back it either, declaring, “I don’t support strikes because they are always a sign of failure.”

Then Labour’s right wing went on the warpath—against the anti‑cuts movement.

A report from Blairite think-tank Policy Network warned against “the temptation of short-term political benefit from opposing cuts”.

Instead, the report’s authors say Labour must prioritise “fiscal sustainability”. By this they mean reducing the deficit by backing Tory cuts.

The justification for all this is electoral. Senior Labour figures think elections are won, not by building a left wing mood in the country, but by chasing after voters who switched to the Tories.

Yet this argument ignores the hardening of public attitudes against cuts.

Some 61 percent of people thought the 30 November strikers were “justified”, according to a BBC poll.

The Tory cuts are polarising the country. Even the most moderate of union leaders have been forced into action. If Labour doesn’t join them it risks becoming an irrelevance. 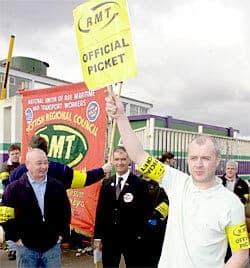