This article is over 12 years, 5 months old
Edinburgh council attempted to use contract labour to break a crucial industrial dispute by refuse workers. But it failed.
By Pat Smith
Downloading PDF. Please wait...
Tuesday 04 August 2009

Edinburgh council attempted to use contract labour to break a crucial industrial dispute by refuse workers. But it failed.

Refuse workers in Edinburgh have taken six weeks of industrial action, including working to rule, in response to the council’s plans to implement a new wage structure.

This could have left some workers £6,000 worse off.

As the Edinburgh Festival began and one million visitors descend on the city, the council hired private contractors to deal with trade waste and keep the city centre clean.

But the workers’ action had such an impact that it forced the council back to the table. It made a new offer to workers, promising no loss of earnings in return for acceptance of new shifts and duties.

The new offer will be put to the workers for approval.

Scotland’s first minister Alex Salmond is “championing” the Johnnie Walker whisky workers who are fighting for their jobs.

Meanwhile, his Scottish National Party (SNP) colleagues who run Edinburgh council with the Liberal Democrats attacked another group of workers.

The planned changes were part of Edinburgh council’s single status plan. The council says around 80 percent of staff would not lose out.

One Edinburgh refuse worker said, “You wonder where the council finds the money to hire private contractors and put them up in city centre hotels when it is so cash-strapped it needs to cut our wages.”

Tony Ross, a former union steward at the Russell Road depot, said that management had told the workers that it was possible to make up the lost wages.

It could be done if they were willing to adopt a more flexible working pattern and take on a wider job remit.

The proposals include working in parks and gardens, and road cleaning.

Workers could have been asked to cover all these areas on one shift.

The council wanted cleansing department employees to give up public holidays and provide a seven-day service.

The days would then be added to annual leave.

Tony said that even if they were willing to accept all of these conditions it would still mean a massive pay cut of at least £4,000.

The council says this could be made up in shift work.

This is not available to the refuse workers.

Tony said, “It says that under the new proposals everyone will be on the same scale and have equality but this is not true.”

Workers are angry and bitter about the value the council seems to place on the service they give.

They fear there may be plans to privatise the more profitable parts of the service. 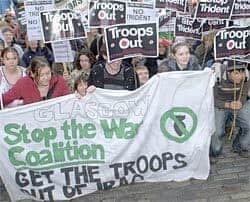 Scottish Power: All out action to win victory

Transport from all over Britain