This article is over 11 years, 8 months old
English Defence League (EDL) members have been humiliated and driven out of Dudley today. Anti-fascist activists and the local Asian community combined to halt the EDL seizure of an empty warehouse on the proposed site of a new mosque.
Downloading PDF. Please wait...
Monday 03 May 2010

English Defence League (EDL) members have been humiliated and driven out of Dudley today. Anti-fascist activists and the local Asian community combined to halt the EDL seizure of an empty warehouse on the proposed site of a new mosque.

They hung a St George’s Cross flag, an Israeli flag and a banner reading “No Surrender” from the roof.

In response hundreds of local people protested into the early hours of the morning, joined by anti-racist activists from Birmingham. Assed Baig, president of the Staffordshire University student union, told Socialist Worker, “When activists entered the warehouse the police confronted them. Protesters managed to get the majority of the EDL supporters kicked out of the building. A few remained and barricaded themselves on the roof.”

Activists gathered again at 11am today determined to drive out the remaining EDL supporters.

“We won!” Sadia Jabeen told Socialist Worker. “Around 300 local black, white and Asian residents and a few activists from Birmingham gathered at the warehouse.

“We surrounded the site for hours, chanting anti-EDL slogans and calling people out to support us.

“Then we heard that some EDL supporters had tried to attack the existing mosque and that a young Asian man was arrested trying to defend it.

“So we went there and told the police we would not get out of the street or disperse until he was released, and until we drove the EDL out of town.

“Eventually the police gave in – they released the young guy and broke onto the roof to remove the remaining two EDL members.

Assed added, “There was a real sense of urgency and anger. We made clear to the police that unless they removed the EDL there would be a riot.

“The youth came out in serious numbers, despite attempts by community leaders to keep them indoors. They were not prepared to let the EDL intimidate people.”

Geoff Dexter, a trade unionist who joined the protest said, “The EDL wanted their stunt to be a Nazi beacon of hate in the run up to the election – and we stopped them.”

“The unity that was forged when the EDL came to town last month was crucial in the fightback today. And now our victory will make that stronger and wider.

“We need to ensure that the EDL cannot bring any further racism and Islamophobia to our towns and cities.” 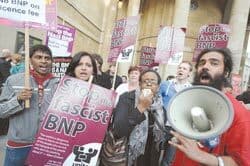