EDL outnumbered and frustrated by anti-racists in Walsall

A determined 700-strong rally demonstrated in central Walsall yesterday (Saturday) against 150 racists and fascists from the English Defence League (EDL).

The EDL, frustrated at their diminishing numbers in the face of large and united opposition, ended the day fighting among themselves. Some 28 were arrested.

Speakers at the We Are Walsall rally looked out over flags and banners from the Unite, PCS, NUT and NASUWT unions.

The rally was also supported by Labour councillors and MPs for Walsall North and South. Valerie Vaz MP said that there was “no place in Walsall” for the EDL.

Aftab Nawaz spoke on behalf of the Union of Muslim Organisations, which has been a central part of the coalition against the EDL in Walsall.

Other speakers included a representative of Sikhs Against The EDL and a local taxi driver. Walsall’s taxi drivers struck for the day in protest at the presence of violent EDL thugs.

Dean Harris from We Are Waltham Forest brought greetings and solidarity from the campaign that humiliated the EDL in east London at the beginning of this month.

Weyman Bennett, joint secretary of UAF, urged everyone to join the anti-fascist protest in Walthamstow on 27 October when the EDL is set to return.

Martin Lynch of Black Country UAF said, “We are now mobilising to get as many people as possible down to Walthamstow to stop the EDL again.”

Unity against the EDL in Walsall (Video: Geoff Dexter) 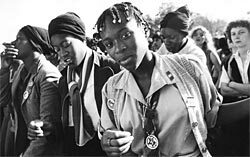 Unite Against Fascism: Join the carnival to stop the BNP Nazis