Now we have a new date to celebrate. 11 February 2011: the day the dictator Hosni Mubarak was brought down by the Egyptian revolution.

Mubarak ruled Egypt for 30 long years. His regime was drenched in the blood of his opponents—who were tortured, imprisoned and murdered. Corruption ran through every office of government.

The immense wealth of the country is concentrated in the pockets of a tiny few while almost half the population live below the poverty line.

Successive US presidents found a friend in Mubarak for their imperialist wars. The Israelis found an ally happy to help oppress the Palestinians.

It wasn’t the army who brought him down. It wasn’t politicians. It wasn’t foreign troops. It was a revolution made by millions of ordinary Egyptians.

They took to the streets in Cairo and in cities and towns across the country. They marched, occupied and went on strike.

They endured beatings, tear gas and bullets. Yet still they stood and fought. Their tremendous struggle brought down one of the most brutal dictators in the world.

At the start of the revolution I witnessed the height of the street demonstrations and the mass occupation of Tahrir Square in Cairo.

It was an exhilarating time.

But it was followed by ferocious street-by-street battles and a drawn out struggle before Mubarak finally went.

I returned to the streets of Cairo the day after Mubarak’s fall. The city was still filled with a collective roar of celebration.

This truly was a festival of the oppressed. Women, men, young and old—who never thought they would see this day—danced, sang and cheered in their tens of thousands. It was impossible not to be carried along by the throng.

And then into the square, Tahrir, a name that will now forever represent the spirit of this revolution. It was a sea of Egyptian flags. Fireworks lit up the sky as scooters wove through the crowd with horns tooting and flares burning.

People embraced and took photos of each other against placards and banners. Others held up their mobile phones to record the historic moment.

They celebrated the achievement of weeks of struggle—but also decades of endurance.

Because it wasn’t all joy. Hanging from buildings, and from railings all over the square were giant banners depicting the “martyrs”: the 300 who lost their lives during the revolution.

Two women dressed in black approached me. The older of them held a picture. “He was my son,” she told me. “His name was Mohamed. He was 16-years old when he was killed.”

Another man held up a picture of his friend, 30-year old Ahmed. “They found six bullets in him,” he said.

Several large memorials are set up along the roadside. People gathered around and read the dedications, and a small tree was decorated with notes and photographs of the dead.

“We should rename the streets after the dead,” said one volunteer doctor at the medical station at the side of the square. “They died so we could be free.”

Even as people were dancing in the street, others told me the struggle wasn’t over. They were happy and relieved that Mubarak had gone—but that wasn’t enough.

People were talking about the inequality in society, and the wealth that’s been stolen from them by Mubarak’s regime.

Ahmed, a lawyer from Alexandria, and his friend, an engineer, both said they were prepared to go home tomorrow but that the revolution isn’t over.

“Half of Egypt is poor,” said Ahmed. “When the chance came to fight many of the poor came to Tahrir because they want a better life, an education, a job.

“We all fought together. We can’t let it go back to how it was. I have seen people getting food from rubbish bins, workers who can’t afford medical care.

“Yet rich politicians fly out of Egypt to have their operations.

“They and the business men have stolen all our money.”

His friend interrupted—“They won’t be rich after now!”

But Mubarak’s rich cronies are still there, in the cabinet. The army, who have taken control, say this is just in the interim until elections are called.

Most protesters tell me they are prepared to trust the army for the moment. They see it as a protector of the revolution. Families queued up to be photographed alongside soldiers and tanks.

But there is also wariness about the future. There is as yet no date for elections. The emergency powers are still in place.

Many people told me that they would be ready to fight again if their demands were not met.

“If the army do anything against the people,” one protester, Ahmed, said, “we know the way back to Tahrir.”

‘Now we are not afraid of anything’

The arguments and debates about whether everyone should leave the square stretched into Sunday morning.

Some vowed to remain until all of the regime had been dismantled.

The roads opened for the first time since 28 January when the police disappeared.

Army officers went into the square early and started tearing down tents, even as people slept in them.

People were shocked that the army would treat them like this—but they had been through too much to be pushed around. They darted under and around the soldiers’ barrier.

Word went out that people had been roughed up. Soon thousands returned to the square. Even those who felt the demonstration had served its purpose came back, because they thought the army should treat the people with respect.

The army has now cleared the square, but these incidents showed how the confidence and sense of liberation that people have gained in the struggle has changed people.

In fact, precisely because Mubarak hung on for so long, people became more politicised as the struggle deepened.

It was the entry of organised workers into the struggle, however, that finished Mubarak off. This is often overlooked in the mainstream media.

The formidable power of the massive Egyptian working class is why rumours abound about the army’s desire to clamp down and ban strikes.

The army is panicking because the strikes have continued and spread even after Mubarak’s exit.

The walkouts in massive workplaces have inspired numerous small disputes about pay, corrupt bosses and greater rights at work.

Streets away from Tahrir, I met striking insurance workers fighting for higher pay. At the airport, staff were holding a mass meeting on the concourse. They were on strike demanding permanent contracts and their boss sacked. By the time my plane took off, they had won their contracts.

These struggles have the potential to push forward the momentum of the revolution and deepen its impact.

The ruling class has shown it won’t give up power without a fight, so there will be more battles ahead.

But ordinary people now have had a taste of their power. They brought down Mubarak. They achieved the impossible—now they can do anything.

“We were afraid of dying, but now we are not afraid of anything,” said protester Mohammed. “We wanted to breathe free. We decided we can do this, we did do this.”

People’s pride in their revolution

There was immense pride in the nature of the revolution­—in particular the way people organised themselves.

There were the doctors who came to help the wounded and stayed.

The teachers from the university who offered free classes to protesters.

The teams of volunteers who did shifts securing the square, checking ID to keep undercover police out.

People who had previously been cogs in a gigantic, inhumane system began to run their own lives—and their own city. Even as the last occupiers were holding out, a big clean up was underway.

The road was being repainted. Teams were dispatched to touch up the railings along the pavement.

They didn’t want anyone to say they had destroyed their own city. 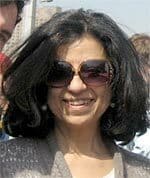