This article is over 11 years, 3 months old
A statement from the Revolutionary Socialists of Egypt on foreign intervention in Libya issued on the 20 March 2011.
Downloading PDF. Please wait...
Thursday 31 March 2011

More than a month after the outbreak of the Libyan Revolution, the UN Security Council (after discussion of the Libyan issue in secret meetings) has imposed a No-Fly Zone. The Security Council has chosen military intervention as its first step, without even preceding it by attempts to provide humanitarian aid or weapons to the rebels. A number of states then announced their readiness to begin the military operations, which began yesterday.

The Arab regimes, and the Arab Maghreb countries in particular, have witnessed an arms race accompanied by the formation of alliances with the European Union and the United States which have set them one against the other. This process has brought money from crude oil, which is controlled by international monopolies, flowing back into the region again in order to buy arms. This confirms that the huge arms budgets, which directed the sweat and toil of the Arab peoples into the pockets of the global arms companies, were designed to buy weapons for internal repression or wars with neighbouring countries.

We did not hear the voice of the Security Council, the European Union, or the Americans, for decades while Gaddafi, and his like among the Arab regimes, suppressed their people with the utmost brutality and piled up wealth. They said nothing, so long as these regimes implemented the recommendations of the International Monetary Fund for the abolition of any social support for the poor, which was the only consolation for the Arab peoples. For as long as companies kept open their doors to global capitalism they kept silent.

But once the people had decided to overthrow their corrupt regimes, and actually overthrew the head of the regime, first Ben Ali, and then Mubarak, and the opportunities offered by modern imperialism to the Arab regimes to slaughter their people dried up, then the solution was to intervene.

Intervention means the sacrifice of a few scapegoats, while working to contain the Arab revolutions within the framework of “democratic” niceties and easing the pressure from the masses, in exchange for the removal of social and economic demands, and the national demands of anti-imperialism.

Modern imperialism uses various mechanisms to achieve its single goal, which is to ensure that the Arab regimes remain faithful to the obedience of the monopolies of global capitalism and the politics of colonialism. This is achieved in alliance with the classes which benefit from keeping the old regime alive, and which fear the spread of popular revolution.

Intervention takes many forms: through propaganda and the use of dubious sources of funding linked with the American administration and companies supportive of US-Zionist imperialism as well as through military operations. The entry of the Peninsula Shield force into Bahrain, the announcement of military intervention in Libya, Hillary Clinton’s visit, the bags of dollars which appear under the under the pretext of ‘supporting democracy’ and spreading democratic awareness ‘ are all part of the same scheme. This does not mean it is a ‘conspiracy’, but there is naturally a close interdependence of interests, between systems and governments, and international capitalist monopolies.

The foreign intervention is not to support democracy, but it is part of the counter-revolution. The ruling regimes are allied in order to preserve their interests, against popular revolts. Which leads us logically, and not as a matter of rhetoric, to recognise the inevitability of continuing the revolution, in order to win the ultimate elimination of all systems of oppression and exploitation, and not just temporary reforms. This goal cannot be reached within the limits of a regional revolution.

No to foreign interference. No to counter-revolution.
Long live the revolution of the peoples. 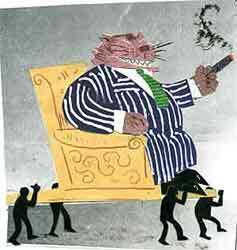 ‘Spy for us or we’ll deport you,’ say British spooks