This article is over 12 years, 8 months old
The Egyptian government’s plan to slaughter the country’s pigs as a response to swine flu provoked riots in the capital city of Cairo last Sunday.
By Matthew Cookson
Downloading PDF. Please wait...
Tuesday 05 May 2009

The Egyptian government’s plan to slaughter the country’s pigs as a response to swine flu provoked riots in the capital city of Cairo last Sunday.

Residents of the Manishyet Nasr shanty town hurled stones and bottles at police and set fire to barricades in an attempt to stop authorities enforcing the cull.

Police fired tear gas and charged into the crowd, injuring many and arresting at least 24 people.

The country’s impoverished Coptic Christian minority own over 300,000 pigs. Most earn a living through a combination of rubbish collection and pig farming.

The residents of Manishyet Nasr are known as the capital’s garbagemen or “Zabaleen”.

The Zabaleen play a vital role in collecting and recycling waste. They take rubbish back to their neighbourhood to sort out what can be sold and what needs to be burned or thrown away. The pigs are fed much of the edible rubbish.

But the government wants to slaughter the pigs despite there being no reported cases of swine flu in Egypt.

Both the World Health Organisation and the Food and Agriculture Organisation say there is no scientific rationale for a cull as the disease is passed between humans.

Hosni Mubarak, the Egyptian dictator, is a key US ally in the Middle East and is deeply unpopular. A powerful wave of workers’ strikes and a large opposition movement has shaken the government in recent years.

The state wants to appear to be acting decisively to stamp out any threat from swine flu, as it is still suffering from the effects of avian flu – which has killed 26 people in the country since 2006.

Mubarak also wants to divide the opposition by attacking and scapegoating the Christian minority.

The Copts make up around 10 percent of Egypt’s population. They face oppression and discrimination.

Progressive movements in Egypt have demanded recognition of the discrimination Christians face.

The Muslim Brotherhood, Egypt’s main opposition group, has traditionally been hostile to the Copts but has condemned the slaughter of the pigs. 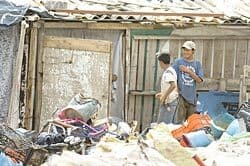