A meeting of the EIS council unanimously backed the plan at a meeting last Saturday.

The union is now committed to trying to build for a strike with other unions that have refused to sign the government’s lousy deal.

They include the NUT and UCU unions.

The Scottish government must approve any changes to our pensions.

Despite their rhetoric, ministers have said they will pass on the increased pension contribution in April.

The EIS has tried to get discussions with the Scottish National Party government, but it has not responded.

The EIS is the largest single education union in Scotland, with members in nurseries, schools, colleges and universities.

Other smaller unions like SSTA and the NASUWT also struck on 30 November and they should now join the growing fightback.

A national education shutdown will be a real blow to the Tories.

If we win on pensions it will give confidence to everyone fighting back against austerity.

The EIS council also replaced the union’s retiring general secretary, who has been in his post since 1988, with a leftwinger, Larry Flanagan.

The appointment meeting is more like a papal election than a trade union meeting.

But Flanagan was the only candidate who was still a classroom teacher.

His election reflected the mood for the union to fight.

Flanagan is an English teacher in a Glasgow secondary school and was also once a Militant Labour councillor. He left Labour in protest against war in Iraq. 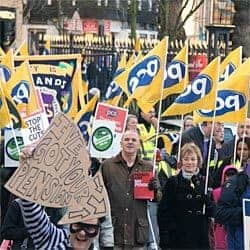