This article is over 10 years, 2 months old
More than 700 electricians and their supporters repeatedly broke through police lines to march through the city of London today, Wednesday.
By Simon Basketter
Downloading PDF. Please wait...
Wednesday 09 November 2011

More than 700 electricians and their supporters repeatedly broke through police lines to march through the city of London today, Wednesday.

Today is the Unite union’s national day of protest in defence of electricians. It began at 7am this morning with a demonstration at the Pinnacle building site at Bishopsgate, near Liverpool Street, initiated by rank and file workers.

A group of building contractors have set up the Building Engineering Services National Agreement (Besna) in opposition to the existing Joint Industry Board (JIB) national industry agreement. The new proposals would cut wages by up to a third.

Electricians travelled from across Britain, including from Manchester and Newcastle, to join this morning’s protest in London.

One electrician told Socialist Worker, “The bosses are trying to squeeze every last drop out of us. It’s time to stand up to them.”

Workers pushed through police to block the roads despite concerted police efforts to prevent them. They succeeded in holding up all the traffic in Bishopsgate.

They then marched to the Gratte Brothers construction site at Cannon Street. A manager there had previously claimed that he wanted to pay workers £1 an hour.

Workers occupied Cannon Street station, closing it for a period.

They then held a mass meeting where they decided to march to the Farringdon Station construction site. They had heard reports that workers there had been told they’d be disciplined if they joined the protest.

“That’s why we have to shut down sites.”

Members of the RMT and PCS unions joined the protest to show solidarity. An activist from the Education Activist Network also spoke to the crowd, and won the biggest cheer.

Protests will continue throughout the day and more electricians are expected to arrive for the official Unite protest at 11.30am.

Workers say they are determined to march “hand in hand united with the students later today”.

11.30am: assemble at the Shard project, St Thomas’s Street 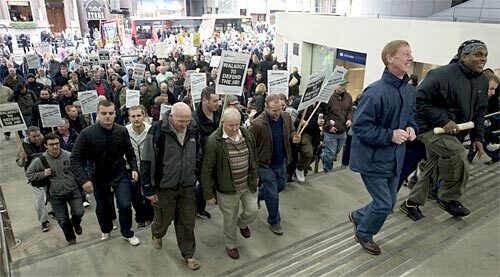 Corus electricians walk out in Redcar

Kirklees builders are set to strike