The workers are campaigning to stop building bosses tearing up their national agreement and cutting wages by up to 35 percent.

In Liverpool workers protested outside the Liverpool Central Library site. And in Scotland electricians protested at a Balfour Beatty site in Cambuslang, Lanarkshire.

In London, one electrician announced to cheers from the crowd, “In New York they have occupied Wall Street. We have occupied Oxford Street. The workers united will never be defeated.”

The electricians assembled outside the Park House shopping centre site. Despite a heavy police presence, they blockaded the site entrance and the road.

Scotland Yard had called on the Unite union to cancel the protest. The union refused.

The police were being somewhat forceful in their attempts to clear the road, so workers voted to march down to the Bond Street station construction site.

To the noise of chants, drums and music the good natured but determined protest spread across Oxford Street.

Amid the chants of “Whose streets, our streets” one worker said, “We have made one company back off, we need to get the rest on the run too.”

Again the police made a concerted effort to push the workers off the road.

Again they failed. As one electrician was calling for escalation of the dispute, the police barged forward.

Workers held back the police – then ran back up Oxford Street to again blockade the Park House site entrance.

Workers burnt copies of the new contract from T Clarke, one of the seven companies at the heart of the dispute.

One told Socialist Worker, “They want to bring in a new grade of workers in, that will get less pay and fewer rights than an electrician. It is a blatant attempt to deskill the industry and destroy our conditions.”

They then marched to another entrance and demanded that a union official have access to the site to address workers. Bosses reluctantly granted this demand.

A PCS civil service workers’ union rep called for the “public and private sector workers to unite” and for construction workers to join strikes on 30 November. Electricians applauded him. There were cheers when it was announced that health workers in Northern Ireland were on strike.

Unite officials spoke of their determination to pursue the campaign. But a number of electricians demanded to know why no date had been set for a national ballot.

One told Socialist Worker, “Enough. We can’t just protest. We need to shut down sites. The union needs to get a move on.”

Another said, “Whether illegal or illegal, ballot or no ballot, we need to walkouts on sites to stop the bosses.”

There were calls to turn the protests into pickets and “to stop deliveries to sites and convince people to stay outside the gates”.

Pressure is mounting on the employers. They are starting to lose contracts because of the dispute.

Rank and file electricians have shown a magnificent level of militancy. There is growing pressure for the dispute to escalate and win. 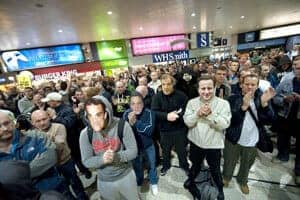 Shut the construction sites down

Construction fight in Manchester too