This article is over 10 years, 1 months old
Rank and file electricians walked off jobs, protested and blocked roads in towns and cities across Britain this morning, Wednesday.
By Simon Basketter
Downloading PDF. Please wait...
Wednesday 07 December 2011

Rank and file electricians walked off jobs, protested and blocked roads in towns and cities across Britain this morning, Wednesday.

They are battling building bosses’ attempts to slash their pay by 35 percent and bring in a new grade of semi-skilled worker.

At the Balfour Beatty site at Blackfriars station in central London, no electrician went into work. Pickets gathered on all entrances and turned lorries away—despite a sustained police attempt to stop them.

Today was meant to be the day of the first official strike against the attacks. It’s also the day that Balfour Beatty has threatened to sack workers who don’t sign up for their new, worse, contracts.

Workers at Balfour Beatty across Britain voted by 81 percent to strike in a recent ballot. But their Unite union called the action off after bosses threatened to challenge the ballot in the courts.

Another said, “I’m out because they want to deskill my job. They’ll always try to stop any strike but what’s the worst they can do?”

Workers said they had to take action to stop the assault—official or otherwise.

In London, workers marched to Balfour Beatty’s headquarters to protest outside. A post worker respected the impromptu picket and refused to deliver the mail.

Workers then marched to the Gratte Brothers site at Victoria. As they arrived a fire alarm mysteriously went off on site and hundreds of workers came off the job.

Balfour Beatty is one of seven building contractors that have set up the Building Engineering Services National Agreement (Besna). This is in opposition to the existing Joint Industry Board (JIB) national industry agreement.

Construction workers walked out at the Grangemouth site to join Balfour pickets and around 200 workers at ConocoPhillips protested in Immingham. Some 300 protested in Hartlepool, where electricians managed to free an arrested demonstrator.

Electricians are winning support from other workers. In London today, members of the RMT, UCU, PCS and NUJ unions joined the electricians. Students marched to the site to show their support.

Teachers from the NUT union at Langdon School in Newham, who are also striking today, sent a solidarity message. The support gives the lie to the idea that public and private sector workers are pitted against each other.

Bob Crow, general secretary of the RMT, joined the pickets. “We’ve got to show solidarity with workers under attack,” he told Socialist Worker.

“There’s an injustice being done here.”

He told Socialist Worker, “The government is trying to pitch public and private sector workers against each other. They want a race to the bottom while politicians and bankers look after themselves.

“But these attacks are all part of the same thing—attacks on working people.”

Update on this evening’s picket at Blackfriars

Workers have refused to cross a picket line at the Balfour Beatty site at Blackfriars station in London for the second time today.

Up to 100 electricians and supporters joined an evening picket at the site.

Two minibuses of cable installers agreed to respect the picket line and turned around. A number of other workers, both directly employed and agency workers, did the same.

One told Socialist Worker, “I am not crossing a picket line, simple as that.”

One worker initially went into work and then came back out. He said he “simply couldn’t do it. You have to have some respect for yourself and for others.”

Groups of the night shift of electricians met outside the gate and decided to stay out. Others simply didn’t show up at all.

It was a fitting end to a day that saw unofficial walkouts across Britain.

The workers’ Unite union called off an official strike after legal threats from the construction bosses. But today, rank and file electricians significantly escalated the war in the construction industry.

As one member of the London rank and file committee put it, “People voted by more than 81 percent to strike – and today they struck.” 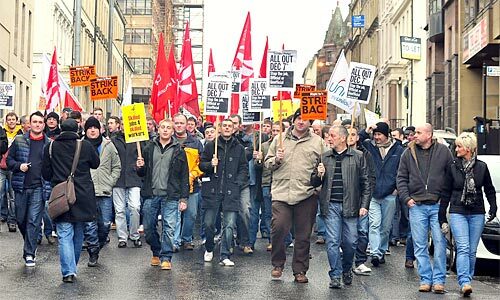 Shut down the sites to beat bosses