This was despite the firm admitting that it had put false information on a blacklist about former engineer Dave Smith for his trade union activities.

Dave’s ET ruled in the company’s favour. It accepted that Dave, as an agency worker, did not have the same rights as a directly employed worker.

Dave told Socialist Worker, “Because of UK law, agency workers don’t have rights. Carillion admitted blacklisting me, but claimed I wasn’t its employee.

“Trade union rights are human rights. We are going to fight in the courts and the building sites to get them.”

Witness evidence and documents presented at the ET accused Carillion of spreading malicious lies about Dave.

These lies caused him to suffer periods of unemployment and resulted in his children going onto milk tokens.

Dave worked on building sites controlled by John Mowlem and Schal International, both subsidiaries of Carillion, in 1998 and 1999. He raised a number of safety concerns including over asbestos and poor toilet facilities.

The Information Commissioners Office disclosed documents for the first time under Court Order during the ET. They identify Carillion and its subsidiaries John Mowlem and Schal International Limited as having supplied information about Dave to a secret blacklist.

A shady organisation called the Consulting Association operated the blacklist.

Dave’s 36-page file contains many entries about raising concerns when he was elected as a safety representative for the building workers’ union, Ucatt.

Much of the material on his file is completely untrue and was merely added to smear his character. Allegations of acts of arson and sabotage were added to Dave’s file while he was working on a Schal construction project in Brentwood, Essex, in 1999.

The note “cannot be proven” was added to the file.

If true, the allegations would amount to serious criminal misconduct. Yet Dave remained working on the same building site for six months after these allegations appeared on his file.

At no time were these claims ever put to him. Yet the file with this false, malicious information was secretly circulated among the 44 largest construction employers in the industry.

The documents presented to the court show that Carillion was a very active member of the Consulting Association.

Its managers attended regional meetings and were significant contributors to the costs of the Association.

Dave’s barrister Dave Renton said in his summation, “This case is about companies telling lies about a worker. Lies that caused that worker detriment. Even now the companies are still not prepared to fully come clean about what they have done.”

Evidence in the case also confirmed this week’s Socialist Worker report that the blacklist went wider than construction workers and that police supplied some of the information on it.

Dave Clancy is the Investigations Manager at the Information Commissioners Office. He said in evidence, “There is information on the Consulting Association files that I believe could only be supplied by the police or the security services.”

He also told the court that the Consulting Association held files on elected politicians, journalists, lawyers and academics.

Dave Smith also made these allegations in his witness statement. Dave is the only person to have been granted a Court Order to view the entire unredacted blacklist.

Similar allegations were first made by Mick Dooley, another blacklisted construction worker, during his employment tribunal against Balfour Beatty in 2010.

In response John McDonnell MP said, “I am calling upon the government to launch a public inquiry into the full extent and impact on people’s lives of blacklisting.

“These revelations are truly shocking and warrant a detailed and open, public investigation.

“The Consulting Association scandal is one of the worst cases of organised human rights abuse ever in the UK.” 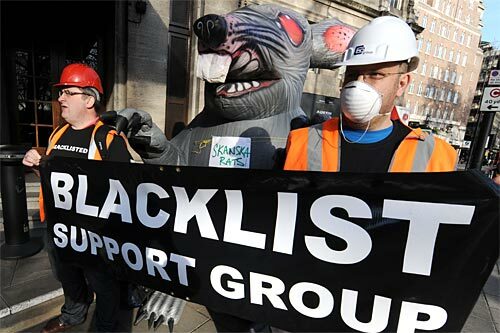 Revealed: the true scale of the blacklisting scandal