Enthusiasm and anger on the campaign trail with Jeremy Corbyn

“We’ve got a solid vote here,” one confident leafleter said to me. “So the main thing is reminding people that there’s an election and when it is.”

And it’s true that the response we got was overwhelmingly positive. Lots of people simply said, “yes”.

“I always vote Labour,” added some. Or, “Yep, I’m Labour.” Or, “Already voting for you!” Many took “Vote Labour” balloons.

“He’s just a damn good MP,” said one voter, pointing to the leaflet.

“I wouldn’t vote Labour everywhere,” one man said, taking a window poster. “But he’s one of the good ones.”

It’s clear that Corbyn’s left wing stance against New Labour’s policies have won him this support.

“We’ve been lucky to have a left MP here,” said one of the Labour activists. “It’s meant the local party has stayed active. Most of us don’t agree with the New Labour project.”

But that didn’t mean they escaped people’s anger at parliament and politicians.

“They’re all crooks and liars,” one woman shouted as she passed the stall. “All of them! I won’t be voting for anyone.” Some others shouted more expenses-related abuse.

Later, out on the doorsteps, an older man was more conflicted. “I like him a lot,” he said. “He helped me out a few years back. But I’m not going to be voting.

“Parliament is so corrupt. They’re all just out for themselves.”

I pointed out—correctly—that this MP is not at all corrupt. “Yeah, but it’s the system,” he replied. “It’s not all MPs, but the vast majority are scum. I hope he wins—but I’m not voting.”

This was too much for a young Labour activist, who intervened. “The thing is, you have to vote,” he said. “You have to have some good people in parliament. How else will we change the system?”

“This is what it’s been like for the last six months,” he told me afterwards, sounding tired. “Our canvass returns are full of undecideds and deliberate abstentions.

“But my argument is the same as when I stayed in the Labour Party despite the Iraq war. You have to be on the inside to change anything.”

With the leaders’ debates dominating the media, he was also frustrated with the rise in support for the Lib Dems.

“Look at their record on the council here,” he said. “They mess everything up and sell things off—and then they lie about it.”

A few doors on, a man told us, “I’m a Labour voter but I’m wavering this time. I just feel so let down. They’ve had 13 years. How can they have missed so many opportunities?” 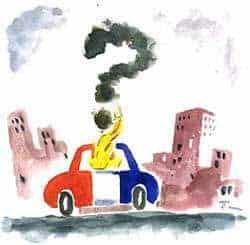 Offer is far from purrfect

Fujitsu workers vow to fight on