Firefighters and control staff in Essex were set to begin a series of walkouts on Wednesday of this week over job cuts and conditions.

Numbers have already been slashed from 750 to 656 since 2010. The plans will also see a reduction of emergency control staff by 20 percent and harsh new changes to their working practices.

Alan Chinn-Shaw, brigade secretary of the FBU in Essex, said, “We are facing cuts of an unprecedented scale resulting in more than a quarter of all frontline firefighter jobs being cut.

“The public will have to wait longer for their local fire engines to arrive in the event of an emergency.

“It will be impossible to maintain the same safe and professional service we currently provide.”

The action will take the form of short period strikes and action short of strike.

Firefighters and control workers will be striking on Wednesday, Thursday and Friday from 9am-6pm.

The latest cuts were announced shortly after Essex fire service admitted to an accounting error.

It said it would have to raid its financial reserves to repay a £15 million debt to the government because of the error.

The fire service is at crisis point. Ever since the Tories came to office in 2010 over 5,000 frontline firefighter jobs have been cut—and more are expected to go.

It means crews are not able to respond to emergencies safely. At the same time as cuts to the fire service, they are going for firefighters’ pensions.

Under proposed pension changes, firefighters will be expected to work a further five years until they are 60.

Firefighters in England last struck on 9 December last year—and the unions have not called any new strike dates.

Time is running out, and it is a mistake to let momentum dissipate.

Only a serious programme of strikes can beat the attacks on the fire service and workers’ pensions. 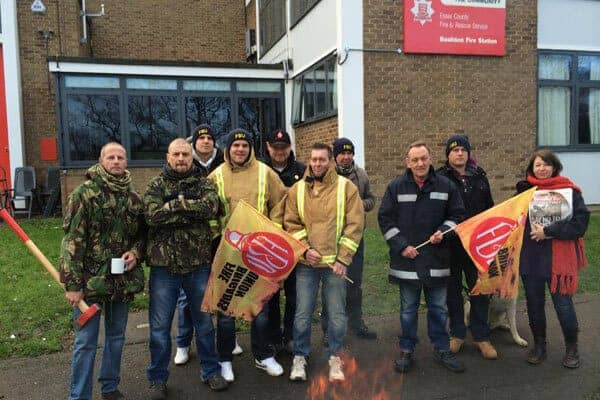