PICTURES OF William Hague’s campaign to save the pound were splashed across newspapers last week. It has reopened the old debate over the single European currency. But the argument is a diversion from the real concerns that most people have in Britain.

Pensioners get an insulting 75p a week increase. No one can live on the minimum wage. Yet we are all supposed to get worked up over whether the pittance we live on is paid in pounds or euros.

Sir Ken Jackson, leader of the AEEU engineering union, says joining the euro will save manufacturing jobs. But the euro is run by the same cut-throat bankers who are destroying jobs and starving the poorest people the world over. Jackson could save jobs now. He could mobilise the power of his hundreds of thousands of union members to stop the rundown of Ford Dagenham and factory closures across Britain.

Instead of key union leaders weighing in behind one group of bosses or another over the euro, they should be leading a fight against New Labour and its big business backers. That is the best answer to William Hague and the section of bosses who support his jingoistic campaign over the pound. 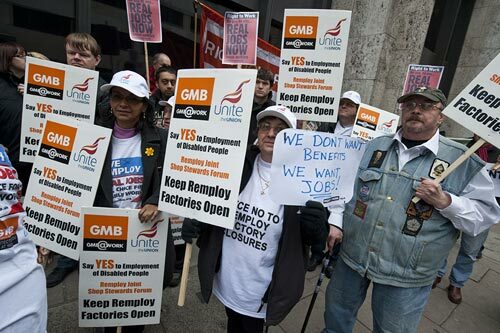 Workers protest outside parliament at axe of public bodies