Earlier this week the governments of Belgium, the Netherlands and Luxembourg had to bail out banking and insurance giant Fortis at the cost of 11 billion euros.

The German economy is huge – it accounts for a third of the gross domestic product of the European Union (EU).

But it is now in serious trouble, contracting for a second straight month, its weakest showing for five years. Exports are also languishing at an eight year low.

Across the EU services and manufacturing activity contracted for a fourth consecutive month in September.

The European Commission warned earlier this month that Germany, Britain and Spain would enter recession this year, and that the entire EU might only just escape the same fate.

Since then Ireland – hailed as the “Celtic Tiger” during two decades of growth – has officially entered recession.

Industrial output in Spain and Italy has been in decline since the start of this year, with no sign of any recovery. Speculation is now mounting about the stability of Spain’s banking system.

The Italian bosses’ organisation, Confindustria, reports that Italy will experience a year of economic contraction in 2008 with worse to follow next year.

Italy is experiencing a pattern of contraction and weak expansion coupled with the ongoing credit crunch, a budget deficit veering on being out of control and rising inflation.

That is a nightmare scenario that other European states are now looking at with dread.

European governments of both the centre left and centre right have followed free market policies, chasing after Britain and the US in a “race to the bottom” as to who can drive down welfare services, labour rights and pensions the furthest.

That has generated a reaction. In Austria last weekend voters gave their verdict on a “grand coalition” government of the centre left Social Democrats and the right wing People’s Party.

The Social Democrats’ vote fell from 35 percent four years ago to 30 percent this week, with the People’s Party down from 34 percent to 26 percent – the worst showing for both since the Second World War.

Although the socialists took the biggest chunk of the poll yesterday, fascist parties garnered nearly a third of votes – the Freedom Party winning 18 per cent and Jörg Haider’s Alliance for Austria’s Future taking 11 per cent.

Heinz-Christian Strache, leader of the Freedom Party, targeted immigrants in the campaign with slogans such as “Vienna must not become Istanbul”.

The far right’s success in Austria has triggered a series of anguished articles in the media. The Times bluntly asked, “Is fascism making a return?”

This follows the success of right wing anti-immigrant parties in Italy earlier this year – which has unleashed a wave of appalling racist attacks in the country.

But there is another side to this picture. The financial press is lamenting the failure of France’s president Nicolas Sarkozy, their one-time golden boy, who has failed to balance the country’s budget or to launch his promised offensive against pensions and working time regulations.

Sarkozy’s failure is due to resistance by trade unions and students. In Italy last week, one million trade unionists took to the streets to challenge an attack on the national labour contract by the government. This follows major demonstrations against racist murders in Milan and Naples.

In Germany the unions have chalked up a number of successes over wages. There is growing speculation that support for the radical left Die Linke party might overtake the Social Democrats.

How people react to growing economic turmoil depends on who gives a lead. Fascists can gain by targeting immigrants – but only if the left fails to channel anger against bankers and bosses. 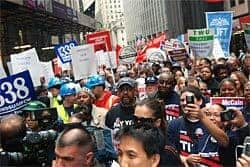