Europe’s growing wave of resistance to the crisis

This article is over 13 years, 2 months old
Across Europe there is a growing rebellion against attempts to make ordinary people pay for the economic crisis. Socialist Worker reports on the protests that have swept Greece, Italy and Germany in the past week
Downloading PDF. Please wait...
Tuesday 04 November 2008

Greece is still in the grip of a growing strike wave in opposition to the right wing government’s attempts to pass the costs of the economic crisis onto working people.

On Thursday of last week Olympic Airlines workers struck and blocked a runway at Athens airport over plans to sell off the company.

Underground and tram workers in Athens were on strike on Monday of this week. On Wednesday local authority workers who will stage a national demonstration in Athens and on the following day students and teachers are set to strike.

The attacks involve cuts in teaching hours and mass sackings of teachers. Berlusconi also wants children of immigrants who fail a compulsory language test to be taught in ghettoised classrooms, cut off from other primary school pupils.

Over one million people took to the streets of Rome on Thursday of last week as parliament passed the laws. Teachers in both the primary and secondary sectors struck while students blockaded roads, rail lines and bridges.

On 7 and 14 November there will be an education shutdown involving students and trade unionists. In rural areas whole communities are mobilising to stop the closure of their local primary schools.

Professors are holding classes in public squares in protest at planned university reforms.

A veterinary science class – complete with four donkeys – was held beside the Leaning Tower of Pisa.

Within the movement there is a growing debate over how to defeat Berlusconi’s measures.

Many look to lobbying the great and the good, but a growing minority wants to build towards a general strike.

The education minister is still working on possible changes to the “reforms” but so far shows no sign of backing down.

The honeymoon for the right – which followed its election in the spring – is now over. Most encouraging are the high levels of anti-racism evident on the protests.

More than 30,000 German engineering workers took part in “warning strikes” at the start of this week in support of an 8 percent pay demand.

Companies targeted by the giant IG Metall union included engineering giant Siemens and car maker Volkswagen. The union branded a below inflation offer for its 3.6 million members a “provocation”.

The strikes took place in four German regions and are due to be extended to others. 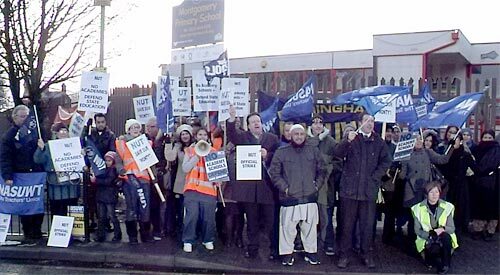 Solid strike against academies in Birmingham