This article is over 16 years, 4 months old
A month has passed since police shot and killed Jean Charles de Menezes, a 27 year old Brazilian, at Stockwell tube station, south London. But questions about the shooting remain as urgent as ever.
Downloading PDF. Please wait...
Saturday 27 August 2005

“Every day we discover more and more lies. We have heard too many. We simply demand truth and justice.”

These were the words of Jean Charles’s cousin, Alessandro Pereira, when he attended a vigil at Downing Street on Monday of this week.

The family—and millions of people in Britain—want answers about the shoot to kill policy, introduced by police without public debate or parliamentary scrutiny, and an apparent cover-up of crucial details about the killing.

While the political establishment has closed ranks around the chief of the Metropolitan Police, Sir Ian Blair, Jean’s family have continued their fight for justice.

Alessandro handed in a letter to Tony Blair on Monday which called for Jean’s killers to be brought to justice.

Afterwards Alessandro told journalists that, in addition to their demand for a prosecution, “the family call for a full public inquiry into all the ­circumstances [surrounding] the death of my cousin, including the shoot to kill policy and the lies we have been told by the Metropolitan Police”.

She told Socialist Worker, “There must now be a public inquiry that looks at everything that has gone wrong in this case.

“There is a shift towards a more armed police force—but there has been no public debate on this question or on the policy of shoot to kill.”

Over 300 people attended the vigil in support of the family, with about 150 joining a subsequent march on New Scotland Yard. 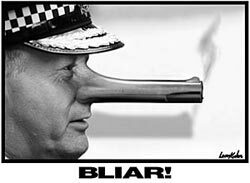