This article is over 9 years, 9 months old
More evidence is emerging that the British government is responsible for torture.
Downloading PDF. Please wait...
Tuesday 10 April 2012

More evidence is emerging that the British government is responsible for torture.

Abdel Hakim Belhadj was “rendered” to Libya via British-controlled Diego Garcia in 2004.

Belhadj is suing the British government, its security forces, and Sir Mark Allen, a “former” director of MI6.

Evidence of Britain’s role in the rendition of him and his wife, Fatima Bouchar, is detailed in documents held by the Libyan security services, which came to light after Gaddafi was ousted.

Now they say they have stopped. They are lying.

One senior minister signed off on this specific rendition. 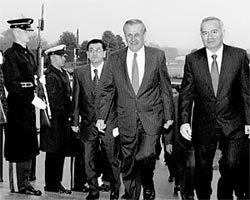