Ex-mayor of Carlisle says, ‘Labour is no longer a vehicle for social change’

A socialist election campaign by two former Labour mayors in Carlisle, the north west of England, is making waves.

John Metcalfe, one of the former mayors, is standing as a Carlisle Socialist and Trade Union candidate, under the TUSC umbrella.

John is also a member of the Aslef train drivers’ union.

Along with Craig Johnston, the second former Labour mayor and a member of the RMT transport union’s national executive, John has helped build a left wing coalition in the city.

The local RMT branch is supporting his campaign and that of all five Carlisle Socialist council candidates.

The group emerged out of discussion between a core of activists disillusioned with Labour.

“Labour has moved so far to the right that it doesn’t resemble the party I joined,” John told Socialist Worker.

“It is no longer a vehicle for social and political change.

“When you come to that conclusion, you can either do something about it and fight for socialism, or you can do nothing. We decided we would do something.

“Eric Martlew, the sitting MP, is retiring and the Labour Party has selected a Blairite as his replacement. We felt that we needed to give a left of centre alternative to people.”

The activities of the fascist British National Party (BNP) in the city have increased the urgency of organising a left wing alternative.

“The BNP is moving into territory that Labour has abandoned,” said John.

“It is standing more candidates than us. We felt we couldn’t allow this to happen anymore.

“When we stood as part of the NO2EU coalition in last year’s European elections we did a stall in the city centre and confronted the BNP.

“People came up to us afterwards and thanked us for doing that.”

The campaign has already made an impact.

“The campaign has received a tremendous amount of coverage in the local media and the left wing press.

“I’m not sure how we’ll do. but we’re quite confident. There’s a groundswell of feeling against the main parties, and people are looking for something different. Hopefully it will be us.

“The election is not the end date though. We are building something for the future.”

For more information go to » www.carlislesocialist.org 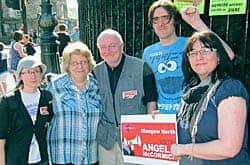 Vote against cuts and organise to fight