Management are poised to tear up agreements and restructure jobs in order to cut costs.

They want to slash the jobs of maintenance workers who keep the underground going.

The leaked document “Maintenance Directorate–Strategic Planning and Performance” was the lengthy agenda of a day school for maintenance bosses on the 21 January.

The document clearly outlines how management can take the unions on, using the economic crisis to push through cuts. They declare, “Recession helps—now is the time to make changes”.

On job cuts the document states, “The TUs [trade unions] are fundamentally against any action that reduces members…

“I do not think that people understand the numbers we are talking about or at least it has not sunk in.”

One proposal is to tackle what it regards as misuse of time off for “accidents at work”.

The tone of the document is hostile to trade unionists throughout.

At another point it refers to the “aging entrenched workforce”.

The plan describes under the heading “weaknesses”—“trade union agreements”—and argues for doing away with “inefficient agreements”.

This means an attack on the gains won by the maintenance workers in recent years.

At one points it moans that, “drawn out consultation stifles change.”

It also argues for “preparing management stakeholders to ride out a strike.”

One remarkable point the bosses make on slide 53 is that “maintenance can always be outsourced”.

This is despite the admission in the same sentence that “the PPP structure has not been an effective contractual structure there are others that work”.

As the document puts it, “We must plan for a strike and prepare people for it.”

On that at least, workers on the Tube can agree.

“But we’re going to take the papers’ advice and ‘plan for strike and prepare people for it’.”

RMT to strike against tube plans

This is merely phase one in an attempt to restructure jobs across the Tube.

London mayor Boris Johnson has already declared that £5 billion of cuts need to be made across Transport for London.

There are going to be further job losses, redundancies, roster changes, attacks on annual leave, terms and conditions, safety and pensions.

As the rank and file bulletin on the Tube, Across the Tracks, puts it, “Workers across all grades, companies and unions on LUL, Metronet and Tube Lines, need to organise now and raise the united campaign for strike action.”

In response to the cuts, the RMT has written to all reps, stating that if the plans are not dropped by 25 March a strike ballot will be issued to all members. 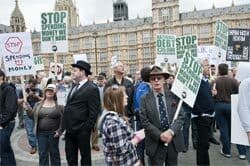 Salvinder Dhillon: ‘We stand for all workers’