This article is over 15 years, 5 months old
Strike action at Exeter mail centre has been called off after an agreement was reached between the CWU union and management.
By Fran Choules, CWU area rep, Exeter
Downloading PDF. Please wait...
Saturday 16 December 2006

Strike action at Exeter mail centre has been called off after an agreement was reached between the CWU union and management.

Some 450 postal workers were due to strike unless management backed off from penalties imposed following a seven day unofficial walkout in September.

But an agreement has been reached – and the union and its members see it as a complete vindication of their stand.

Among the issues resolved are a fair method of covering contracted overtime, and swapping of duties which will continue as before the strike.

The CWU local reps’ room will be relocated to larger premises while maintaining access for members.

Also, any movement of work away from the mail centre will in future be subject to negotiation with the local CWU union reps. This victory has important connotations for the future. With proposals for many changes soon to be received, it demonstrates that the union reps and the members will not be bullied by management into accepting these changes.

There are still two issues to be dealt with. The branch secretary is effectively barred from his office and about 20 members are facing disciplinary charges arising from participation in the unofficial action. Unless these issues are resolved, the whole South West Number 1 Branch will ballot for industrial action. 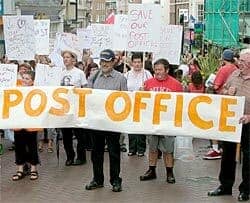