Expose this coalition of lies, sell-out and cuts

This article is over 11 years, 7 months old
Tory Chancellor George Osborne will announce the coalition government’s first £6 billion of cuts, on Monday – and much more will follow.
Downloading PDF. Please wait...
Tuesday 18 May 2010

Tory Chancellor George Osborne will announce the coalition government’s first £6 billion of cuts, on Monday – and much more will follow.

Far from “holding back” the Tories, the Lib Dems have given them political cover.

The Lib Dems have long opposed building new nuclear power stations. But within days they signed up to an agreement that will allow new nuclear stations to be built.

The agreement commits the government to the maintenance of Britain’s nuclear weaponary and the renewal of Trident.

And the new government immediately set about protecting itself – making it harder to get rid of them by introducing fixed-term parliaments needing a higher proportion of MPs to dissolve it.

Those who thought that the Lib Dems were progressive are outraged about how easily they slid into bed with the Tories. Some have left the party.

Yet the Lib Dems have a track record of joining Tories in local councils and ramming through cuts.

At a 2,000 strong meeting of Lib Dem members in Birmingham last Sunday, only a handful opposed the move.

The Lib Dems are not progressive.

They veer left or right depending on what gives them the most power.

The fact that they chose to join with David Cameron instead of Labour shows their opportunism – they chose what they thought was the side most likely to retain power.

The Lib Dems opposed the war in Iraq – until it began.

They previously made much of their opposition to top-up fees in universities.

They have also claimed to be a party for LGBT equality, but have entered a coalition with bigots.

Tory cabinet minister for equalities, Theresa May, has voted against nearly every piece of gay rights legislation including the repeal of Section 28, gay adoption and equalising the age of consent.

The fact that the Tories could only form a government by

cobbling together a coalition reflects the deep disillusion that exists towards parliament and political parties in Britain.

It also means the Tories are weak – and workers’ struggle can bring them down. 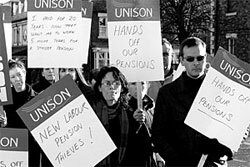 The mood is growing for a united fight

Manchester remembers all those killed in Afghanistan

‘Evidence’ gathering through informers will lead to more injustice