Eyewitness in Athens: ‘People have said no to austerity – and it’s only the start’

Celebrations are breaking out all over Greece tonight, Sunday, as the results of today’s referendum come in – with a resounding No to the EU and IMF’s proposed austerity package.

In Athens’ Syntagma Square, student Danai told Socialist Worker, “We always knew it would be a no but not by such a margin – it shows people aren’t afraid and want a better chance.”

Thousands thronged around the square and other celebrations broke out in other districts around Athens.

Pensioner Katerina said, “People have said no to austerity – and it’s only the start. It’s the beginning of a new political way that is for the people, not the dictatorship of financial institutions that no-one elects.”

Behind her the famous fountains were lit up red. A PA system blared out messages of solidarity from other countries.

For Dimitri the vote means “a better deal and some room to breathe”. He added, “They’ve cut so many jobs that I have to go through hell to find work. I’m currently ‘volunteering’ at work for free in the hope they’ll hire me.”

Even the pundits on TV called it a “class vote” with support for No strongest in poorer areas.

This was no shock to voters in the industrial belt of western Athens. At the Peristeri polling station, print worker Giorgos was campaigning for Syriza earlier today.

He told Socialist Worker, “There will be a big No vote here. Many people are out of work since the factories on the river closed down. Europe needs to change.” 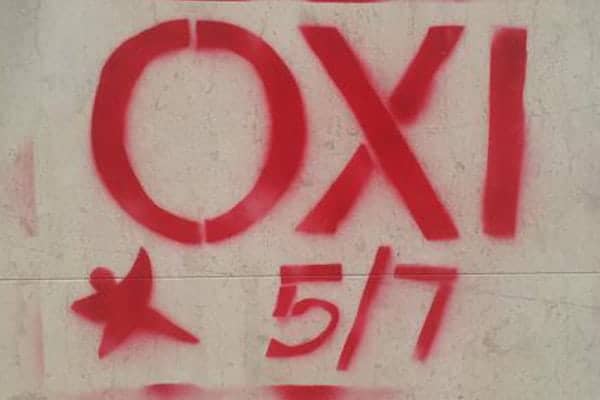 Keli, who described herself as a working mum, said, “Of course it’s a no! And ok maybe it means leaving the euro – I don’t care. They all tell us it will be a catastrophe. But we, the youth, we all tell them to fuck off.

“We’ll get a better deal now. And trust me, there will be more strikes and protests too.”

The highest No vote was among young people. First time voters were blocked from voting in January’s election as the right wing former government claimed there wasn’t time to update the lists. Today they had their revenge.

Nefeli told Socialist Worker, “There are students in my class who are starving because their parents can’t afford enough food. Some of my friends have already gone to Britain to find work. I want to stay here – and a Yes vote would mean I can’t.”

The Yes campaign strategy of striking fear into the elderly fell short – despite the banking chaos that backed it up.

Pensioner Dimakou said, “The IMF and EU have cut wages, pensions, benefits, services, everything. It’s hard for people supporting families who are losing their jobs.

“It’s hard for the young who can’t find jobs in the first place. It’s hard for everyone except the rich – people like the arms dealers you see driving the fancy cars.”

As her friends walked past, one greeted her “good oxi morning”. The Greek word for no, is now part of every language in the world. 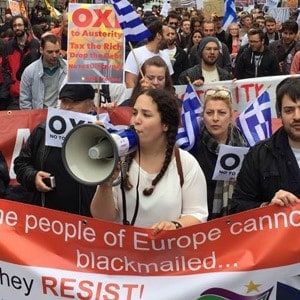 Part of an 800-strong march in Edinburgh – just one of many anti-austerity solidarity protests that took place around the world ahead of the referendum (Pic: Josh Brown)

Many bosses have been reported for trying to blackmail their employees into voting yes. A Yes vote would have been their revenge on workers for electing a left government in January.

There was talk of Greek prime minister Alexis Tsipras having to resign.

The weight of Europe’s most powerful institutions was hurled against a No vote, with the most terrifying blackmail.

But Giorgos said, “It’s like in the occupation – they’ve got the big guns but we’ve got the masses.”

There has also been solidarity from all over the world too – and it hasn’t gone unnoticed.

Stavroula, holding a sticker for the left wing Red Network inside Syriza, said, “We’ve seen the protests in solidarity with us. When the time comes we’ll do the same for you.”

Leading Syriza members are already taking to the airwaves to say the vote strengthens their position for negotiating a better austerity package. It does.

But it’s been clear all week that for many voters No means so much more – and the vote has strengthened their position to fight for that too. 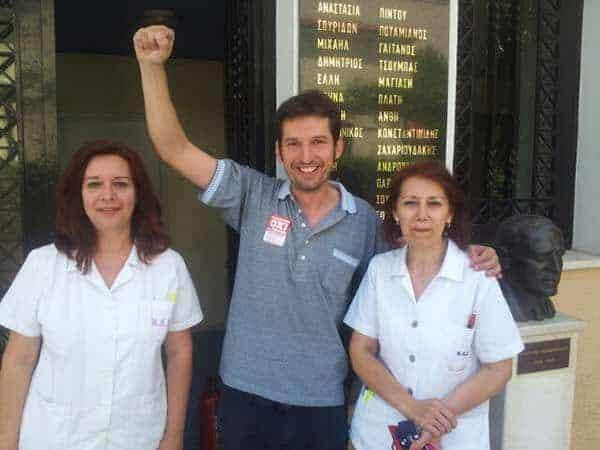 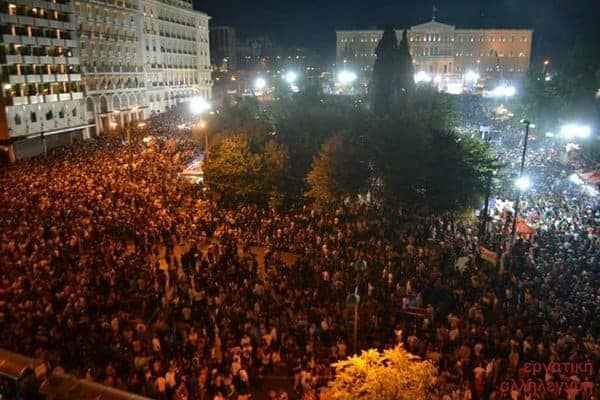 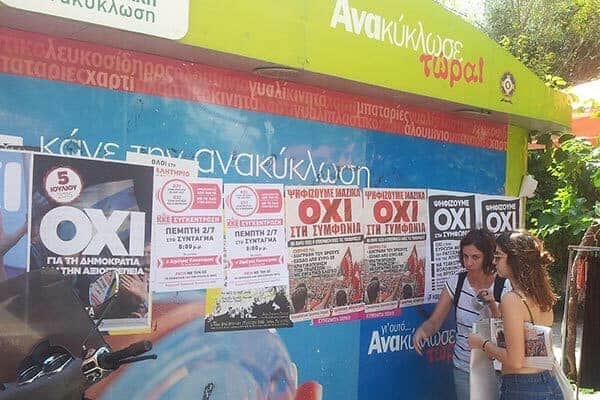