Eyewitness to Palestinians under siege in Lebanon

This article is over 14 years, 7 months old
The Lebanese army, backed by the US and France, is tightening its siege on the Palestinian refugee camp of Nahr el-Bared.
Downloading PDF. Please wait...
Tuesday 29 May 2007

The Lebanese army, backed by the US and France, is tightening its siege on the Palestinian refugee camp of Nahr el-Bared.

This siege brings back all the old memories of massacres and repression.

A group of university lecturers and students organised aid for Palestinians in Tripoli, north Lebanon, as the army laid siege to Nahr el-Bared to crush the Fatah al-Islam group.

One of them told Soialist Worker, “In the neighbouring Beddawi camp I was told by refugees that Fatah al-Islam had virtually no support.

“Now there will be both more support and more opposition to the government. This can only mean more conflict.

“The situation inside Beddawi doesn’t need describing. In one day over 12,000 Palestinians arrived from Nahr el-Bared. The overstretched water supply is now under even more strain.

“Many of the refugees are saying that the men have decided to stay in Nahr el-Bared as they fear losing their homes.

“We were told of attacks on refugees in the city. A mob captured and killed a Palestinian man, tortured his son and slashed his mother’s arms with knives.

“Now many refugees are too scared to accept accommodation in the city, even from friends.”

Bassem Chit told Socialist Worker by telephone from Baddawi camp on Tuesday that there have been attempts by Palestinians hold a protest march in Tripoli, but they have been blocked by the army.

“Refugees have reported that over 2,000 homes in the camp have been destroyed,” he said.

“Now the army has set up checkpoints across the city stopping Palestinians from going to work or to college.

“Lebanese and Palestinian solidarity organisations are atempting to break through the siege and provide much needed relief supplies.” 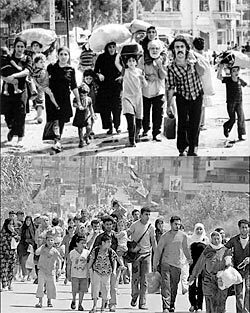