Failed Labour coup shows crisis at the heart of government

This article is over 12 years, 0 months old
Labour is in chaos. The Brownite and Blairite wings of the party are still at each others’ throats as their election strategy collapses in slow motion.
Downloading PDF. Please wait...
Tuesday 12 January 2010

Labour is in chaos. The Brownite and Blairite wings of the party are still at each others’ throats as their election strategy collapses in slow motion.

The third failed coup against Gordon Brown fizzled out last week – but it revealed divisions that go to the heart of the Labour government.

In the hours between former ministers Geoff Hoon and Patricia Hewitt writing letters demanding a secret vote on Brown’s leadership – and ministers issuing statements of support for Brown – a flurry of meetings took place between Brown and senior cabinet figures.

In return for keeping Brown on political life support, a group of ministers around Peter Mandelson demanded more cuts, more quickly – and no more talk of “class war” against the Tories.

Brown had used some left rhetoric when he said that Tory tax cuts for the rich were “dreamed up on the playing fields of Eton”.

But even that was too much for ministers.

So chancellor Alistair Darling stressed, “To me, cutting the borrowing was never negotiable. Gordon accepts that, he knows that.”

He went on to say that the next spending review will be the “toughest” for 20 years.

So the axemen are now pulling Brown’s strings.

But they’re not the only ones propping him up.

Despite more than a decade of New Labour attacks on working class people, many trade unions are still bankrolling the party.

But, in contrast to Mandelson and his puppets, the unions have got no say in Labour’s policies whatsoever.

Unite has policies to protect jobs, support council housing, oppose the war, and much more besides.

Union members should ask what we get for our money when it’s handed over to Brown – and the unions should stop signing blank cheques to Labour. 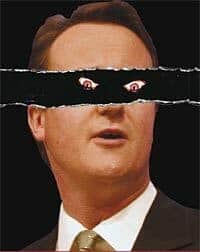 The real face of the Tories