The BNP’s electoral wipeouts in 2010 and 2011 left it with just three councillors. And now it is left with just one MEP, party leader Nick Griffin. The party is torn by crisis, division and financial scandal.

Many key activists have left to set up splinter groups such as the British Freedom Party—now allied with the EDL—Britain First and the English Democrats. These include Bron’s European office staffers Eddy Butler and Chris?Beverley. Butler was formerly the BNP’s national organiser.

Griffin has publicly criticised EDL leader Tommy Robinson. Robinson is currently remanded in custody. He has lost the support of much of the EDL’s rank and file, while the organisation’s number three Tony Curtis quit last month.

Various splinter groups are trying to bring their disparate forces together. These include the Infidels, the English Volunteer Force and the Casuals hooligan firms.

In Sunderland the North East EDL joined up with one-time rivals the North East Infidels this month to stage a 150-strong demo. Hardcore Nazis joined in with their “Blood And Honour” and White Power insignia on display.

Brons’ supporters have urged him to set up a new party as they see potential for fascism to grow in the economic crisis. They look to the success of the French Front National (FN) and the openly fascist Golden Dawn in Greece.

The FN won seats in parliament this year for the first time since the 1980s.

Repeated anti-fascist mobilisations have prevented the racists from building support, which has caused their demoralisation. But they are continually looking for new strategies and it is essential that anti-fascists keep organising. 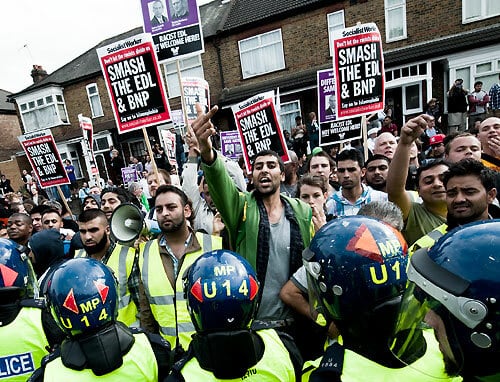