BRITAIN’S FAT cats are the fattest in Europe, while manufacturing workers here are the lowest paid in any major industrialised country. The huge gap between British bosses and workers was revealed in research published last week by Management Today magazine.

Top company executives in Britain have an average “package” of pay, share options and bonuses worth 509,019 a year. Bosses’ pay has risen by 29 percent since the last survey in 1999. Fat cats in Britain now get an average 33 percent more than those in France, who are the second highest paid in Europe.

Only US corporate executives, who average 1 million a year, do better than those in Britain. Manufacturing workers in Britain, however, are the lowest paid in any major industrial country.

Their equivalents in France get 20 percent more. British workers also continue to work the longest hours in Europe.

Lapping up the cream

LOTTERY firm Camelot has given a staggering handout-to its own boss. Camelot chief executive Diane Thompson got an 870,000 payout from the firm.

GERALD CORBETT, former head of Railtrack, pockets a 50 percent pay rise to 370,000 a year in his new job as head of Woolworths, plus a 500,000 bonus this year. He grabbed a 1.3 million payoff when he quit Railtrack 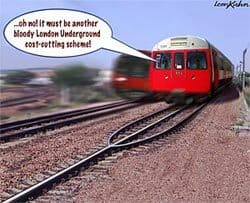 United we can beat back Livingstone on the underground