This article is over 6 years, 8 months old
By Annette Mackin, in Blackpool
Downloading PDF. Please wait...
Tuesday 19 May 2015

Delegates to the firefighters FBU union conference in Blackpool last week debated the way forward for the union in the wake of the general election.

Under new schemes they are expected to work until they are 60, and if they fail to retain levels of fitness firefighters could face the sack and lose up to half of their pension.

Workers struck over 50 times against the proposals, but the action was often marked by excessive caution on behalf of the leadership.

At the conference last week delegates voted to continue the pensions campaign—but serious criticisms were directed at the union’s strategy.

An emergency resolution put by the executive council said, “The FBU message to the new Westminster government and to other governments is that we are not going away and we will continue to fight for pensions.

“The Executive Council will assess the new situation and consult with members in every brigade.

“The Executive Council will continue with a strategy that integrates our political, legal and industrial action—and takes account of the other attacks we face.”

The London region backed a consultation of members, but rejected it becoming a process to shift the decision to end the dispute onto the membership.

Yusuf Timms, FBU London south west area borough secretary said, “We have serious reservations about what this open ended resolution really does and if it takes the campaign any further forward at all.

“We accept that things have changed—the pension scheme is now a reality. We do support a consultation of the membership to discuss where we are, how we got here and what we should do next.

“But we do not support any sort of process that attempts to try and shift the blame of the outcome of this dispute from the leadership onto our members.”

The implementation of the pensions schemes was not inevitable—workers could have stopped it. But solid walkouts were followed up with long periods of inaction, and as a result the most confident brigades became demoralised.

If a consultation of members reflects an unwillingness to mount further strikes then the fault is with the union leadership’s strategy.

Yusuf said, “We await with interest any proposals the executive council have for taking this campaign forward—proposals that are sadly lacking in this resolution.”

Firefighters face a series of attacks from a re-energised Tory government.

Delegates last week backed an emergency resolution moved by Gavin Lynch from Leicestershire FBU to recall conference should there be any compulsory redundancies.

Leicestershire fire bosses have already agreed proposals that would see the reduction of over 120 firefighter posts in the next five years.

The resolution said that if any firefighter is made compulsory redundant and if a local brigade wins a successful ballot to strike, conference should be recalled.

It said, “Conference will then debate with a view to recommend a ballot for national industrial action up to and including strike action.”

As well as compulsory redundancies firefighters face the threat of mutualisation and privatisation.

Large sections of the fire service have already been privatised in recent years and the Tories have already signalled shifts to move more outside the public sector.

A resolution moved by the London region called on the executive council and brigade committees to “play high priority on the fight against ever deepening privatisation and mutualisation.”

A motion put by Merseyside FBU for FBU members to refuse to carry out evictions was also unanimously backed by delegates.

Meeting debates where next for FBU

The FBU leadership called on other union leaders to “inspire a mass movement of opposition against the attacks we now face” in the wake of the general election.

In a resolution passed by delegates it outlined the different fronts where firefighters can expect to be attacked. These include undermining pay and conditions and bringing in police and crime commissioners to interfere with the running of fire services.

A fringe meeting on Tuesday of last week was arranged by the grassroots FBU Fightback.

There were debates on the union’s handling of the pensions dispute—and how firefighters could challenge the strategy to fight back and win.

Dave Williams, West Yorkshire FBU brigade secretary (pc), said, “The Tories are going to come for us. Let’s go back to the call to have at least one period of strikes every 28 days. That is a clear strategy.

“If you’re serious about having a campaign that says we’re not going away revert back to that.”

Paul Embery, London regional secretary (pc) said, “We’ve got an emboldened Tory government against a workforce that is less confident than it was three years ago.

“This is the point where we say we are going to continue this fight—but if we do there is a duty for us to go back to members and seek a fresh mandate.

“If they say they are still up for it then that will revitalize our campaign.” 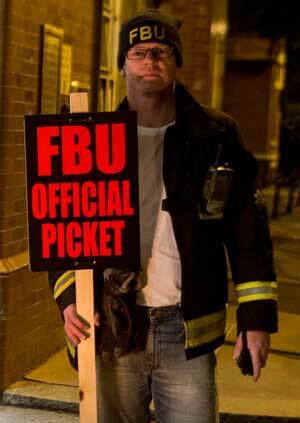