Fears for the future after the tsunami

This article is over 17 years, 2 months old
Three months after the tsunami, there is still no warning system to ensure the disaster cannot be repeated, says Vinod Moonesinghe
Downloading PDF. Please wait...
Saturday 09 April 2005

Three months have gone by since the Boxing Day tsunami battered the coastal regions of Sri Lanka. To mark this passage of time, the bereaved have given alms in remembrance of their loved ones. But amid the rekindled grief — and despite the talk of reconstruction — ordinary people still fear for the future.

The much trumpeted tsunami early warning system has still not been set up. There is nothing to reassure people that they will be given timely warning so that they can seek safety.

Every week, rumours of incoming tidal waves cause thousands of people to flee their homes in panic.

Around 70 percent of tsunami survivors still have psychological problems three months later, according to official figures. In the Indonesian province of Aceh, which bore the brunt of the disaster, there is no functioning mental health system to help an estimated 400,000 people with problems ranging from anxiety to depression and post-traumatic stress disorder.

Families have been split up because breadwinners have to live in places where their workplaces are accessible.

People have also complained of discrimination against Muslims and Tamils in Sri Lanka’s eastern provinces. They say that Sinhalese villages such as Panama — which was relatively unscathed — have been receiving reconstruction aid, while the worst affected areas — Komari, Nintavur, Kalmunai and Mandativu—have been treated meanly by the government.

The area is under military control, which causes further unease — increased by the shooting of a young Muslim motorcyclist by police on 25 March in the town of Akkaraipattu.

People add that the area’s fishing communities are not getting the help they need to rebuild their lives. No steps had been taken to replace the fishing boats, outboard motors and nets lost in the tsunami. There is a severe shortage of shelter and lavatories.

Many hundreds of women here were widowed by the tsunami and must, according to Islam, fulfil certain rites and duties. But they have been unable to do so because they are now destitute.

Meanwhile, it has been reported that the Sri Lankan navy has taken over a deep sea trawler gifted by the people of Lorient, in Brittany, to the fishing communities in the south of Sri Lanka.

Much of the reconstruction aid given to Sri Lanka has gone to the south, particularly the town of Galle. Railway workers have toiled hard and replaced the entire railway track from Colombo to Matara, the southern terminus — a big boon to workers who have to commute to Colombo each day.

Families affected by the tsunami are also receiving welfare payments. But these will continue only until June, and there is a backlog.

There are also fears that governments in the rich nations will renege on their aid pledges. The money promised may not be enough to complete reconstruction anyway, especially with large percentages being skimmed off through corruption. Any cut in aid could prove disastrous to the tsunami victims.

Housing is the biggest problem. Before the tsunami, there was a shortage of 500,000 homes — now there are another 800,000 homeless people and little sign of the promised housing projects.

Government sources blame the lack of land. But in the Matara and Galle districts, people have begun occupying vacant land. They have taken over an abandoned plantation inland from Seenigama, one of the worst hit areas, and have built temporary shacks on it.

The legal ban on building houses within 100 metres of the sea is now being enforced. People whose houses were damaged must allow their houses to be demolished rather than repair them.

But most of the people made homeless by the tsunami are living in tents supplied by aid agencies. These are pitched on the shore well inside the 100 metre safety limit, because not enough land has been set aside for them elsewhere.

Without proper houses, people will continue to live as they did before the disaster in shanties crowded onto the beach, where they are vulnerable to another tsunami.

Even worse, the tsunami scoured the shores, clearing away the plants that acted as a natural barrier and making it easier for the tides to sweep inland.

There is still great solidarity with the tsunami victims. Workers are donating part of their wages to help them, while students are giving practical help with reconstruction efforts in the villages.

But fears for the future, when the welfare payments stop and the new houses have failed to materialise, are widespread.

Vinod Moonesinghe is an activist and spokesperson for Sri Lanka’s Environmental Foundation. He writes in a personal capacity. 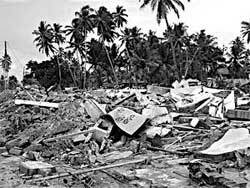 System that keeps us poor made the tsunami so lethal 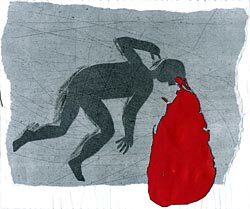