Fees plan will create an elite

This article is over 19 years, 0 months old
NEW LABOUR'S plans to introduce top-up fees for university courses will exclude more working class people from higher education. All universities will be able to charge up to £3,000 for courses. Students will be expected to pay back their fees after they have left university. Even the poorest students will have to pay the fees.
Downloading PDF. Please wait...
Saturday 25 January 2003

NEW LABOUR’S plans to introduce top-up fees for university courses will exclude more working class people from higher education. All universities will be able to charge up to £3,000 for courses. Students will be expected to pay back their fees after they have left university. Even the poorest students will have to pay the fees.

The government will give students whose parents earn under £10,000 a measly grant of £1,000. This is less than the grant of £1,710 that students received when Labour scrapped the grant in 1997.

And such students will still have to pay back any fees above £1,100. Those whose parents earn less than £30,000 between them will get a smaller grant. Families who earn over £30,000 will get no grant and have to pay the full fees. So a couple both in jobs on over £15,000 a year will be hit. That means parents who are a nurse and a postal worker, or a bus driver and a firefighter, for example.

Students’ already unbearable debt will be almost doubled. Education secretary Charles Clarke admitted, ‘The type of debt we are talking about goes up from about £12,000-£15,000 to about £18,000-£21,000. ‘There will be a debt there that is serious. This is a fundamentally market-based system.’

Yet these figures don’t even include the extra debts, loans from banks and so on that students are forced to take out just to live. Chancellor Gordon Brown was said to be opposed to the introduction of top-up fees because of the potential political backlash. But he was bought off by the offer of an independent ‘access regulator’ that will only allow universities to charge higher fees if they accept more students from working class backgrounds.

The rich will be able to pay the fees upfront, leaving their children free from debt, while the poor will be carrying the burden of debt for a very long time. Many Labour MPs are rightly angry. ‘If you end up with a system where poor kids go to the ex-polytechnics and the rich kids go to Cambridge it will be a disaster,’ says Anne Campbell MP. ‘Once the principle is established, universities will be able to do what they like,’ says Labour MP Ian Gibson.

New Labour is worried about the reaction to its plans. There have already been big student protests against tuition fees and the threat of top-up fees. We need to step up the protests.

Brown gives no credit to thousands of families

CHANCELLOR Gordon Brown unveiled the rates of the new Child Tax Credit last week. He called it ‘the biggest financial boost for mothers since the introduction of child benefit in the 1970s, and a £2 billion transfer of resources from men’s pay packets to women’s purses’.

In fact the amounts on offer are pitifully low, and some of the biggest winners will be people on high incomes. If a couple have a joint income of £25,000 and three children they will get a tax credit of just £10.40 a week.

But a rise in national insurance comes into effect at the very same time as the tax credit. That will take away £5 leaving the couple with a princely £5.40-77p a day. To claim the cash you have to plough through a 56-page question form-enough to put large numbers of people off.

Means-tested benefits like tax credits are always a failure in their famed ‘targeting of the poor’. Just before Christmas the government admitted that a third of all families entitled to Working Families’ Tax Credit are not claiming it. That means 604,000 low-income families are missing out on up to £1.4 billion a year-an average of £42 a week.

The government has also been forced to admit that the childcare tax credit is being received by just 2.3 percent of all families with children up to the age of 16.

Who is scrounging in countryside?

SCROUNGERS are buying up huge country mansions and castles around Britain. It’s not asylum seekers, as the right wing press would like you to believe. It’s two of the richest men in Britain. Businessman Stuart Wheeler is the man who gave the Tories £5 million two years ago.

He has spent £5 million on Chilham Castle in Kent for himself, his wife and his 16 year old daughter. ‘My advice to anyone buying a castle is to triple your expected budget,’ says Wheeler.

James Dyson, the boss of Dyson’s, has also just bought a stately mansion. He sacked 800 workers at his Wiltshire vacuum cleaner factory last year to move to Malaysia to exploit cheap labour there. There is no media scapegoating of these two businessmen.

DOZENS OF maternity units are being closed and more will be axed soon unless the government provides more funds. A report from the National Childbirth Trust says a shortage of midwives means only larger specialist hospitals have sufficient staff, and small towns and villages do not have enough workers.

As staff leave these smaller units even greater pressure is put on those who remain. This only leads to even worse shortages of staff. 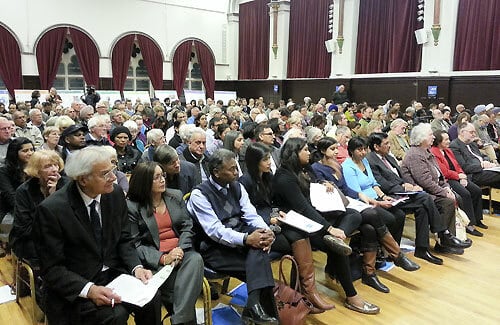 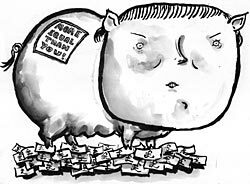 Statement on the crisis in the NSSN