This article is over 13 years, 10 months old
A sustained and determined campaign has forced Fife council to put on hold planned charges for homecare and other services for disabled people.
Downloading PDF. Please wait...
Tuesday 04 March 2008

A sustained and determined campaign has forced Fife council to put on hold planned charges for homecare and other services for disabled people.

The council, which is run by an SNP/Lib Dem coalition, introduced the charges in January. The council has now said it is delaying them while it carries out impact assessments on those affected by the charges.

Local campaigners branded the charges a “tax on disability”. Maureen Closs from the Campaign Against Charges says that the climbdown by the council is a victory that shows the power of grassroots campaigning. “We have taken our campaign throughout the length and breadth of Fife and people have responded to our call for the council to scrap the charges,” she said.

The campaign is demanding that charges are scrapped altogether and point out that the council is sending out mixed messages to service users.

“On the same day that people got letters assuring them about assessments, the finance section posted direct debit slips to service users,” said Maureen. “We still have our work cut out to keep on top of the council.” 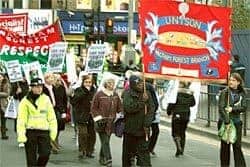