This article is over 13 years, 1 months old
Up to 50,000 postal workers jobs were put at risk yesterday after the unelected Secretary of State for Business Lord Peter Mandelson announced that he plans to sell off parts of the Royal Mail.
By Simon Basketter
Downloading PDF. Please wait...
Friday 19 December 2008

Up to 50,000 postal workers jobs were put at risk yesterday after the unelected Secretary of State for Business Lord Peter Mandelson announced that he plans to sell off parts of the Royal Mail.

The Labour government’s slavish devotion to the market means that unless there is a fightback, the service will be destroyed and the workforce’s pay and conditions along with it.

Peter Mandelson said the government is looking for a private firm to take a stake in the Royal Mail and that multinational delivery company TNT has expressed an interest. Other companies will be asked for their bids.

Ministers say this is “part-privatisation”. But, as Billy Hayes, the general secretary of the Communication Workers Union (CWU) pointed out, “Whether it’s staff shares or minority stakes, any sell-off or joint venture will lead to full blown disastrous privatisation. It always starts off like that and ends up broken-up and downgraded with job losses and loss of service.”

New Labour says it is taking action in response to Richard Hooper’s long-awaited government review of the Royal Mail, which Mandelson presented to the House of Lords on Tuesday.

This states that says new private companies can offer the “confidence, experience and capital” needed to carry out vital changes. What they actually offer is a system run for profit, not as a public service.

If this policy goes through it will be disastrous. Up to half of the 71 mail centres could close.

Edward Leigh the rightwing Tory MP who failed to failed to privatise the post office when the Tories were in government, said, ‘I welcome New Labour to the Thatcherite wing of the Conservative party.’

Disgracefully the Unite union representing Royal Mail managers gave a “cautious welcome” to the proposals. While saying it opposes “full blown privatisation” it goes on the add “Unite also welcomes the recognition in the Hooper Report of the past failures in industrial relations and looks forward to improved engagement between management and the trade unions.”

In fact, both the Hooper review and the government lay the blame for problems at poor industrial relations. But its not the workers who have driven the company into the ground.

The main reason the government is talking about the pension deficit is to make Royal Mail suitable for private intervention. Royal Mail took a pension holiday for more than a decade, which is the main cause of the company’s pension woes. With the pension scheme as it is now, no company would get involved.

In truth the government has been gunning for postal workers for a long time over pensions, closures, job cuts, attacks on deliveries and more.

Unfortunately the CWU has not mounted a strong enough response. There has been too much hesitancy, too much reliance on “winning the support” of Labour ministers.

It is now time to implement the long-held union policy that calls for a break with Labour if any form of privatisation is recommended.

A good start to the fightback is to back the strikes on Friday at mail centres in Liverpool, Crewe, Bolton, Stockport, Coventry and Oxford. But there also needs to be a major national campaign to save the Royal Mail from Mandelson and the private sector vultures.

For more go to » Back the battle to save the post 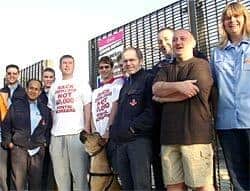 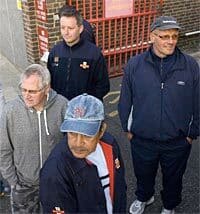