This article is over 14 years, 3 months old
Across London schools and colleges shut down along side Department for Works and Pensions (DWP) sites.
Downloading PDF. Please wait...
Thursday 24 April 2008

Across London schools and colleges shut down along side Department for Works and Pensions (DWP) sites.

The march was led off by students at the college who were there to support striking staff.

Maria José Berhardos, who teaches Esol (English for Speakers of Other Languages) at Lambeth College, was one of the marchers.

She told Socialist Worker that the strike was about pay and wider issues related to the quality of public services.

‘Our college has been threatened with cuts and has had funding taking away from it,’ she said.

‘The government is also pushing a false of view of what education is. For them it’s just about test results and league tables – it’s not real learning.’

She added that ‘everyone at college has been very supportive of our action – including the students’.

The march was organised by the teachers’ NUT and lecturers’ UCU unions, but gained support from across the workers’ movement. Heenal Rajani, a convenor for council workers in Lambeth’s Unison union, joined the march to offer his solidarity.

‘It’s excellent that this strike has happened and that teachers are leading the way for public services,’ he told Socialist Worker. ‘Unison has a lot of members in schools and we’ve told them they’ll have our support if they refuse to cross picket lines.

‘Everyone is getting terrible pay deals and we should all fight together. We currently have a consultative ballot over our local government pay offer.

‘I think the result will be a resounding rejection of the pay deal. I hope industrial action is called, and I hope it will coincide with strikes called by the other unions.’

Outside the Paddington Green site of City of Westminster college in central London students grabbed stickers in support of striking lecturers. Four pickets reported a good response to the strike.

Joe Clancy, one of the pickets, reported that they also faced a particular local issue as college management would only grant the existing pay offer – which the union nationally is rejecting – if lecturers accepted losing five days holiday.

The picket lines at Department for Work and Pensions (DWP) offices in Hackney, east London, were up from the last strike in April. There were four pickets at Sylvester Road DWP office, five at Richmond Road and two at Hoxton.

The civil service workers in the PCS union welcomed the fact they were on strike with other groups of workers.

Anne, a PCS rep at the Hoxton Jobcentre Plus office, said, ‘We‘ve had an effective pay cut in our three year deal. We’re not happy with it. The poor are getting poorer and the rich are getting richer.

‘Everything is going up. All the workers should be joining up because we have all got the same grievances over pay. More unions should be uniting and taking action together. Back in the day we used to do more of that.’ Kathy, another picket, added, ‘This kind of action is making a bigger impact.’

About 200 UCU workers were on strike at Hackney Community College in east London, all the members at the college except the management who were not balloted. None had crossed the picket line by 9am.

Payne Mthimkhulu, a UCU steward at the college, said, ‘It’s important that different unions are striking at the same time. It has a lot more effect on the government if we all come out together. Everyone is really angry at seeing our pay decrease and our workload increase.’

Support workers at the college in the Unison union were very supportive, though they had not been balloted for action. Payne said that many had promised to join a lunchtime protest.

Nick Grant, a member of the NUT national executive, reported that in Ealing 70 of the borough’s schools were closed, with a high an positive support for the strike.

Wormwood Scrubs Education department was shut as the staff joined the strikes, he added.

There was a lively picket line at the College of North East London (Conel) in Haringey. Lecturers told Socialist Worker of their anger at government attacks on their wages and conditions.

‘The further education sector has been neglected and starved of funds for too long,’ said Jenny Sutton, a member of the UCU union’s branch committee at Conel. ‘Students and teachers are both undervalued.

‘We’re defending our conditions and wages because we want to continue giving students a quality education. This strike is a shot across the bows to Labour – if they don’t back down, there’s going to be a ‘summer of discontent’.’

Mavlin Fletcher, another branch committee member, added, ‘There’s already a shortage of teachers in schools and if they keep lowering our pay there will be a catastrophe in further education as well.

‘It’s significant that different unions – the UCU, NUT and PCS – are striking together today. This will give confidence to ourselves and other workers. But one strike won’t be enough – in the future hopefully more unions will join the action.’

There was a lively picket line at Pimlico School in central London, reports John Cooper. NUT members brought down their banner and were visited by the Left List candidate for the West Central GLA constituency, Explo Nani-Kofi.

Teachers there told Socialist Worker how they all face the same difficulties in finding the cash to afford to live from month to month. Some 67 out of 91 staff are now in the NUT, they added, and among them are many newly qualified teachers.

Padraic Finn, branch secretary of Wesminster NUT, said, ‘From past experience we’ve learnt that the threat of united public sector action is the only strategy that will work to fight the pay freeze.’

He also described how teachers there are fighting an attempt by a venture capitalist to turn the school into an academy. ‘We’re currently involved in getting a judicial review on the academy status. Everyone here is opposed to it, as are the vast majority of my students and their parents.’

UCU members at Tower Hamlets College had a fantastic strike, writes Richard McEwan. The strike was solid, with 45 pickets across the college sites. A delegation from St Paul’s Way NUT joined our picket line at Poplar. Lindsey German, Mayoral Left List candidate, and Michael Gavin, the Left List London Assembly candidate for East London, also came along to give her support to our campaign to beat the pay cut. Many Tower Hamlets strikers attended the demonstration in central London.

Teachers had the support of a number of Unison members from the school who refused to cross and actively joined the picket line. 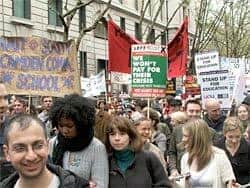 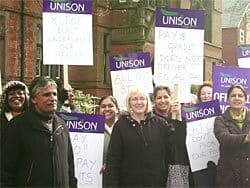 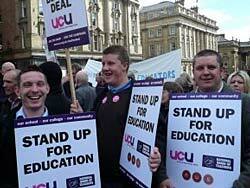 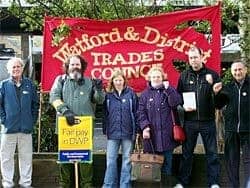 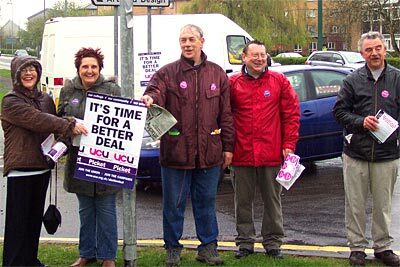 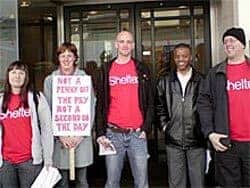 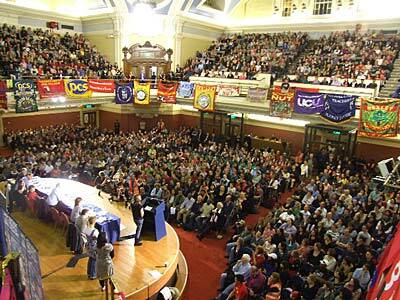 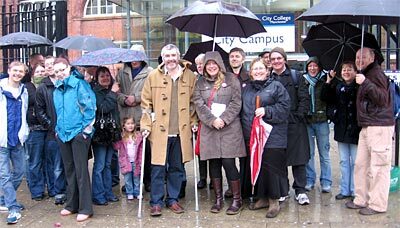 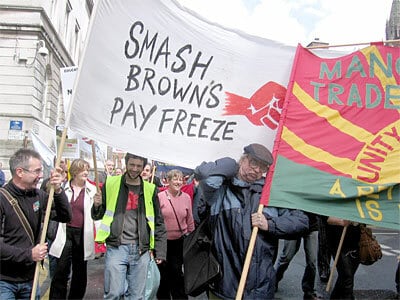