This article is over 18 years, 4 months old
THE PARLIAMENTARY by-election in the Brent East constituency in west London takes place on Thursday of next week. Brian Butterworth, a Unison union branch secretary, is the Socialist Alliance candidate. He spoke to Socialist Worker about why he is standing, and why he thinks Brent needs a socialist alternative:
Downloading PDF. Please wait...
Saturday 13 September 2003

THE PARLIAMENTARY by-election in the Brent East constituency in west London takes place on Thursday of next week. Brian Butterworth, a Unison union branch secretary, is the Socialist Alliance candidate. He spoke to Socialist Worker about why he is standing, and why he thinks Brent needs a socialist alternative:

‘I HAVE spent 20 years in this area, working with and campaigning for the elderly and vulnerable. People in the area who would have previously looked to the Labour Party feel sorely let down by the Labour government.

Resources for ordinary people in Brent have declined dramatically. There is a huge funding crisis in schools and hospitals. Housing is a particular problem in Brent. There is a vast crisis of underinvestment and the area is a wonderland for private landlords. This is also a very multicultural area. This is proof that black and white can live together. But it also means people have suffered from the assault on refugees and the rise in racism.

Brent East has been a Labour constituency for the last 20 years. People assume that it is a safe Labour seat. But Labour’s vote fell from 23,000 in 1997 to 18,000 in the last election. That vote hasn’t gone to the Tories. Their vote has declined too. There are 16 candidates standing in this by-election. That is indicative of the times we’re in.

Many people feel they are not represented by the mainstream parties and feel they won’t get heard. A number of the candidates are saying that they are anti-war. It is a crying shame we couldn’t all come together to avoid splitting the vote. I am standing on a clear socialist platform, against the war and occupation of Iraq, against privatisation and for public services. So far I’ve had a very positive response.

This week, for example, I’ve been invited to talk to community workers in a South Kilburn estate. They want to talk about the issue of crime and drugs, which concerns so many people.

My argument is that we need a community response. Tougher policing has totally failed and has made people even more frightened. Some people from the local Labour Party say that secretly they will vote for me. Some have gone further and are helping the campaign. We don’t know what is going to happen in an election with so many candidates. But we are doing our utmost to raise the banner of a left wing, socialist alternative to the warmongers and privatisers of New Labour.’

A LIVELY hustings meeting took place in Brent on Thursday of last week, organised by the Brent Stop the War Coalition. Eight out of the 16 election candidates were represented. Labour MP Jim Fitzpatrick spoke on behalf of Labour candidate Robert Evans. MEP Evans claims to be ‘uneasy’ about the war on Iraq-although the war is not mentioned on any of his leaflets. Fitzpatrick, however, took a confrontational stance and defended the government over the war.

He got by far the loudest and most prolonged heckling from the audience. There were shouts of derision when Fitzpatrick said there was ‘no connection’ between the war on Iraq and the conditions of people in Brent. Jackie Brown from Brent East Labour Party asked Fitzpatrick, ‘You have spoken your views on the war, the government line, and not Robert Evans. Did he lie when he said he voted against the war at every opportunity in the European Parliament?’

A Labour member also shouted out, ‘Evans was only selected because he said he was against the war.’ Fitzpatrick could only say, ‘I don’t have the voting record.’

Health workers get thrown to the wolves 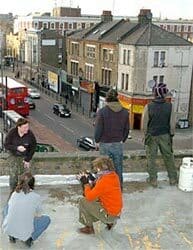