This article is over 15 years, 10 months old
Fiona Millar, a local parent and journalist who has co-written A Comprehensive Future with Melissa Benn, spoke at a meeting opposing the White Paper on Thursday of last week in Camden, north London.
Downloading PDF. Please wait...
Saturday 04 March 2006

Fiona Millar, a local parent and journalist who has co-written A Comprehensive Future with Melissa Benn, spoke at a meeting opposing the White Paper on Thursday of last week in Camden, north London.

Around 150 parents, teachers, Labour councillors and governors attended the meeting. The turnout showed the concern and anger that many feel about the threat to comprehensive education posed by New Labour’s White Paper, even with its minor concessions.

“If schools can begin to change to academies or trust status then the comprehensive model begins to disintegrate.

“The detail in the bill published this week will be crucial. Will there be a clear guarantee that academies will be stopped from selecting? There needs to be a clear role for local authorities. The concessions are very vague.

“The great myth of the right wing media is that anyone questioning the market is against improving education and freedoms. The reverse is true.

“Many at this meeting have been trying to drive up standards for years. The key is the quality of leadership, investment and teaching.

“There is a belief in the government that innovation comes through entrepreneurs. Some academies have seen improvements, but at no faster a rate than community schools – and at much greater expense.

“Schools work best when they reflect their communities, which we have found in Camden. The White Paper admits this, but argues that schools should become independent.

“Schools which draw in all members of the community and draw in all races are a model of the society we want to see.

“There is still too much inequality and division in schools and too much underachievement. Do we solve this with an active market where schools and parents compete with each other?

“Or do we solve it with no selection and high quality schools in every area?

“This is a continuation of the job that the Tories started – contestability widened the gap between the best and worst schools. It is the job of government to offer a system that is fair to everyone – not one that divides people up by race or religion.

“We want children of every background working together. Even with the concessions the fundamental points of the White Paper haven’t changed. We need to have a debate on what kind of education we want. Are children just cogs in a great economic wheel?”

Fiona Millar told Socialist Worker, “My campaign is about admissions, which should be non-selective. The areas where there are still 11 plus entrance exams should be dismantled.

“There is a lack of clarity in the White Paper. How will admissions be brokered between schools?

“Why does the government assume independent sponsors will do better than local authorities? I hope these issues will come out in the debates in parliament.

“There is a question about academies. If we need another school will the government give us one without it being an academy? Authorities may be blackmailed into having an academy even if they don’t want one.” 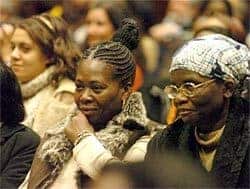