Firefighters on strike for conditions and the public’s safety

Firefighters across the West Midlands struck on Monday night in an important dispute over new shifts and working arrangements.

The fire authority, one of the largest in Britain, was forced to turn to 380 military personnel to provide cover. But it has forced the dispute by driving through new conditions and then refusing to compensate firefighters for working to them.

Pete Gallagher, secretary of the Fire Brigades Union (FBU) in the West Midlands, said on Monday, “The strike is solid. They’ve not been able to get a machine on the run.

“They’ve been saying this is only about the brigade committee, but the strike proves it’s about all the members. It’s time the fire authorities listened.”

Firefighters were to strike again on Thursday of this week and Monday of next. The dispute has national significance.

It arises from the government tearing up national regulations at the end of the FBU’s bitter pay dispute two years ago. Other authorities are looking to drive through the kind of budget cuts West Midlands has made — £2.1 million last year and £3.8 million projected for this.

Robert Rea, FBU rep at Bournbrook fire station, said, “The brigade’s changes affect safety. One change will cut the number of firefighters on an engine from five to four. The brigade has not adhered to what came out of independent arbitration. The working conditions we’re now operating under and the compensation package we’re being offered are inadequate.”

Keith Handscomb, FBU national executive member for East Anglia, was in Birmingham to support the action. He said, “We are here to show solidarity to the FBU members in the West Midlands from the FBU members in East Anglia. We come fresh from winning a dispute in Suffolk after 22 short strikes.

“The fire service eventually conceded and amended their madcap plans. Our message to West Midlands members is simple, stick at it and we’ll stick with you.” Collections at stations are beginning in East Anglia and activists elsewhere are looking to do the same.

Other trade unionists in Birmingham are also rallying behind the FBU. Dave Buckley, chair of the environment section of Birmingham Unison, said, “During the last FBU national strike we had a workplace collection of £360 and a workplace meeting addressed by the FBU.

“We are in a large workplace with 1,500 people and we want to make sure there are enough appliances to provide sufficient cover. If the FBU are forced to continue the strikes we will raise more money.” 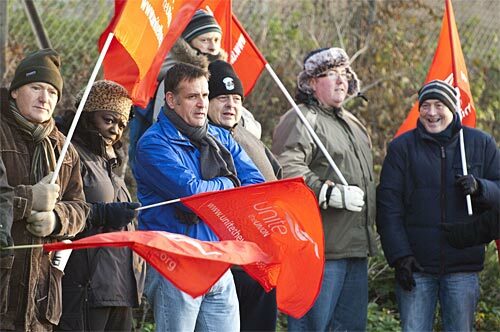 Unilever strikers - we all need to strike together