This article is over 13 years, 2 months old
Fire Brigades Union (FBU) members from all parts of the country will hold a rally and lobby of MPs at the Houses of Parliament in London on Wednesday of this week.
By Neale Williams, London firefighter
Downloading PDF. Please wait...
Tuesday 11 November 2008

Fire Brigades Union (FBU) members from all parts of the country will hold a rally and lobby of MPs at the Houses of Parliament in London on Wednesday of this week.

We are deeply concerned at the steep increase in firefighter deaths and angry at the cuts being imposed upon our service. Eight firefighters died at incidents in 2007 – the worst rate for 30 years.

This year the Audit Commission will examine the fire service and concentrate on financial matters. But you cannot make firefighters or the community safer with a cheaper fire service.

We need increased staffing and investment in quality training. We also need to recognise that preventative measures should not come at the expense of our emergency response. Smoke alarms do not put out fires or rescue people – firefighters do.

I work at a fire station which lost two firefighters at a fire in 2004. We know there are hazards inherent in our work and accept there is a risk.

Our union leaders recognise that the fight we are in is a political one.

We disaffiliated from the Labour Party because of its betrayal during our national strike in 2002 and 2003.

But all the mainstream political parties are committed to “modernising” public services by shedding jobs and slashing services.

Wednesday’s lobby is the start of our campaign to change this approach.

Now we need to put pressure on the government. That means building our own campaign and linking up with other groups of workers.

We need a coordinated campaign across the trade union movement to defend public services. 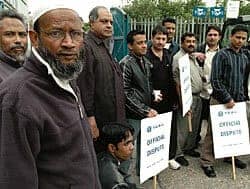