Firefighters turn up heat over pay

This article is over 19 years, 4 months old
Firefighters are to begin voting next week for their first national strike in 25 years, as they head towards the biggest confrontation Tony Blair has yet faced. The move towards a series of strikes has New Labour deeply worried that firefighters and control room staff could spearhead a wider revolt over public sector pay.
By Kevin Ovenden
Downloading PDF. Please wait...
Saturday 21 September 2002

Firefighters are to begin voting next week for their first national strike in 25 years, as they head towards the biggest confrontation Tony Blair has yet faced. The move towards a series of strikes has New Labour deeply worried that firefighters and control room staff could spearhead a wider revolt over public sector pay.

Disputes over pay have already broken out among council workers, lecturers, teachers and tube workers (see below). Confident rallies by the Fire Brigades Union (FBU) over the last few months show the potential for an overwhelming vote for action, and for a clear-cut victory over the government.

FBU delegates stood and cheered after voting unanimously (by 51,849 to nil on a card vote) at a special conference in Manchester last week to hold the ballot. The result will be known on 18 October. Strikes could take place as early as 25 October.

Andy Gilchrist said, ‘The potential for a Third World War might actually affect people’s mortgage rates.’ The money is there to meet the FBU’s pay claim, as Britain ‘has relatively low taxes on business and the rich, and high expenditure on weapons of mass destruction’. He added that the FBU was in favour of higher pay for every group of workers, and that ‘low pay in the rest of the public sector is no excuse for low pay in the fire service’.

The FBU’s pay fight will have a decisive impact on every other group of workers. The government stepped in behind the scenes in July to veto a move by fire authority employers (mostly Labour-led) to offer a 15 percent increase.

It has now appointed its own inquiry on pay in the fire brigade. There was a unanimous feeling at the FBU conference against cooperating with it. Fran Walsh said, ‘I’m a single mum and I’m trying my best to bring up my little boy. I don’t need an inquiry to tell me my pay is absolutely crap. When the time comes I and all the women members of this union will be taking strike action.’

The Times reported on Friday of last week that the government is pressuring the head of its inquiry, Sir George Bain, to come up with a pay rise that can head off strikes. But at the same time reports were circulating among delegates to the TUC conference that New Labour is considering emergency powers to ban strikes by the FBU, which would be likely to take place as Tony Blair sent troops to the Gulf.

The only thing these stories show for certain is that Blair does not know what to do when faced with a determined campaign by firefighters and control room staff. Conceding even the 15 percent the government blocked two months ago would spur on other groups of workers.

A serious battle would rally massive public and trade union support behind the FBU. Leaders of the Aslef and RMT rail unions have already taken important steps towards pulling out their members on the tube and in other areas on safety grounds if firefighters are on strike.

FBU delegates last week knew how high the stakes are, and are pulling out the stops for a big yes vote in the ballot. They agreed a strategy of discontinuous strikes, though some delegates told Socialist Worker that there was already a serious argument for indefinite strike action from a minority of union activists.

Speakers from Merseyside and Essex, where important local strikes have taken place in recent years, left no doubt about what form a series of strikes ought to take. Del Godfrey from Essex said, ‘We are not talking about nine-hour, 15-hour or 24-hour strikes. If a one-day strike the week after the ballot result does not shift the employers and the government, then members in Essex are talking about blocks of eight and ten days of strike action.’

A big yes vote will further boost the confidence of every FBU member. So will support now from other workers, who all have an interest in seeing the FBU win. 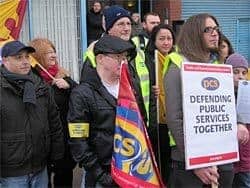